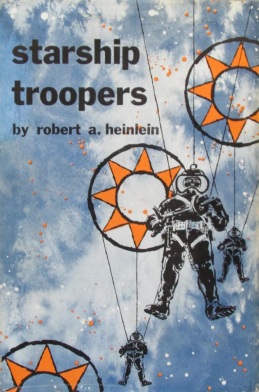 Much has been written on this seminal title by one of SF’s most famous authors – especially about the book’s alleged fascism, satirized by the 1997 Paul Verhoeven movie. The Wikipedia article lists 104 references, and has fairly long sections on the themes and their reception.

I don’t feel like writing an in-depth analysis this time, so let me try to break things down in a few short paragraphs. Reading experience first, politics and a bit of ethics second.

Starship Troopers is a rather fast paced military procedural novel. There’s much less action than I expected – especially in comparison to the movie: the novel focuses on the training and promotion of the main character, Juan Rico. There are a few battle scenes, but the bulk of the book focuses on the organization and procedures of Earth’s army.

The first half deals with the training camp, drill sergeant included. It seems Heinlein helped to give rise to the trope – probably best exemplified later in Kubrick’s Full Metal Jacket. As such the story scratches a few primal itches: deep down, it’s fun to read about people being punished for stupidity or insubordination, promoted after showing endurance, etc. It feeds into the remnants of our hierarchical primate mind. It’s not only pleasing, but also very familiar: we all know this story, and have seen multiple iterations of it – in various forms of fiction, and, to a lesser extent maybe, during our own schooling.

There’s surprisingly little violence in the book, but, yes, aliens are killed without remorse. I’ve written at length about the ethics of enjoying fictional violence, and this book doesn’t even need that defense. I’ve also written about how Haldeman’s The Forever War fails to be an anti-war book: similarly, Heinlein doesn’t pay much attention to the victims – the crucial difference being that he didn’t try to write an anti-war book to begin with.

Heinlein’s prose is solid, easy, supple. That seems simple, but it isn’t: credit where credit is due.

The pacing is generally excellent. There are some explicitly political sections in the book, but one is too long, and a bit of a rant. Another section that overstays its welcome explains the chain of command in a military organization. Both appear in the second half of the book, and add to the general feeling that Heinlein’d better come up with a cool space battle soon!

Just two parts that drag a bit, that’s not too bad. The book is still very, very readable for sci fi published in 1959. The only part that truly feels dated is a rant about the moral decline of society because youngsters aren’t subjected to corporal punishment anymore. There’s also a shoddy section about evolution that Heinlein probably wouldn’t have written today.

Starship Troopers is easily recommended to anyone that enjoys military procedure. If you have a serious interest in the history of science fiction, either you’ve already read it, or it’s on your TBR. Even though I liked The Moon is a Harsh Mistress better, I’ll read more Heinlein in the future. Any suggestions about the man’s vast oeuvre are more than welcome in the comments.

One more thing needs stress: Starship Troopers‘ content is not just simple, superficial entertainment. Whatever the reader’s own stance, Heinlein gives the reader more than enough stuff about morals and politics to ponder. So let’s look at that a bit – briefly, I promise.

For all the accusations of fascism, there’s some surprising progressive stuff too. There’s no nationalism in the book: there’s one planetary federation, and people from all over the world join the military. The main character isn’t white, and Heinlein only discloses this near the end – a nice trick to expose latent racism.

But yes, this book kinda glorifies the military. Is that fascism? I don’t think so. There’s still a form of democracy – no universal suffrage, true, but it’s a long way from a political system with an absolute ruler at the top. It’s to Heinlein’s credit that he’s willing to think about alternatives to universal suffrage for adults, even though his proposed solution is not something I agree with. With this story Heinlein seemed to want to stimulate political debate, and that hardly seems like a fascist tendency to me. (See here for an interesting discussion about the link to Plato’s Republic.)

Heinlein’s future Earth is rather utopian. War on the planet itself has disappeared. The reasons for the war with the aliens aren’t really explained – except for some Lebensraum-ish justification, which might sound problematic if you put it like that, but ecological population pressure is a real issue, so that’s not necessarily inherently fascist either. It is left unclear who started the war, so one would have a hard case arguing Heinlein advocates extra-solar system predatory imperialism.

As for the accusations of racism and dehumanizing the enemy because humans call them “Bugs” or “Skinnies”, well, that seems like overstretching the term ‘racism’. The aliens are in fact insectoid & very, very difficult to communicate with. It’s common practice for humans to nickname & dehumanize enemies. As such, Heinlein’s choices reflect a form of realism, rather than him propagating racism or the boundless killing of other real world humans.

It should be noted the aliens clearly threaten Earth, so even if humanity did provoke the war – again, that’s left unclear – that what is described in the novel can be read as a valid defensive reaction, and not as some glorification of violence for the sake of violence that doesn’t care about human suffering. I’d say that anybody who’s not a vegetarian but has moral problems with this book on this account, should do some serious soul searching.

Correct morals arise from knowing what man is – not what do-gooders and well-meaning old Aunt Nellies would like him to be. The universe will let us know – later – whether or not Man has any “right” to expand through it.

While the first part – “what man is” – is up for debate, and as such only pretends to be an objective validation of Heinlein’s stances, the second part is what I want to acknowledge: there are no a priori rights in the universe. ‘Rights’ are a human concept, not a Natural Law. Existence doesn’t give you rights, other humans do.

In the book’s second course of History and Moral Philosophy, Major Reid claims that all morals come from the instinct to survive above the individual level. As we can hardly survive without cooperation, that might not be too far from what Michael Tomasello‘s research has found: “the basic architecture of human moral psychology—holding ourselves responsible for our actions, feeling that we owe things to others, and that others owe things to us—evolved to make us better collaborators.”

For all the talk of personal responsibility and moral choices, it’s hilarious that Juan enlists on a whim, because of a sexual reflex. I guess Heinlein set it up so that he could slowly sculpt Johnny throughout the story, letting the character slowly internalize the military Ethos. At the same time, it also points at the weakness of any morality that hinges on personal choice and individual responsibility: as if soldiers could learn 100% self-control after a few months of camp training or even active duty service.

To end, another amusing paradox. McCarthyist propaganda of the Second Red Scare clearly had an effect on Heinlein – a Navy man himself during the end of the 1920 and the 1930s, and as such maybe more susceptible to the pervading American nationalist rhetoric. For all the anti-communist subtext in Starship Troopers – the bugs seemingly the ultimate simile for an ultra cooperative social group – it is worth noting that Heinlein’s ideal of military Citizenship “is an attitude, a state of mind, an emotional conviction that the whole is greater than the part . . . and that the part should be humbly proud to sacrifice itself that the whole may live.” Not too different from the root of Bolshevism, I’d say.