2 reviews in this post: first the best jellyfish monograph published to this day – I’ll treat you with a bunch of stunning facts at the end of the review. After that, a much lauded slipstream classic.

Good books on jellyfish are hard to find: there hardly exist any. I’ve had the German ‘Quallen’ by Thomas Heeger (2004) for years, and that used to be the only comprehensive scientific monograph on the subject: someone should translate that in English.

I’m fascinated by the subject, so when I saw this very book in the biography of the underwhelming little book on jellyfish that Peter Williams published in 2020 I bought it instantly.

This book isn’t really about 50 jellyfish as advertised on the back: it rather is a monograph on 5 subjects: jellyfish anatomy, life history, taxonomy and evolution, ecology and finally the impact of humanity on jellyfish. Each subject gets about 20 pages in text (and some graphics & pictures), and after that Gershwin each time presents 10 jellyfish that illustrate some of the stuff from that particular chapter’s subject. Each jellyfish gets a full page photograph, and one page with additional information.

This makes for a bit of a hybrid: this is both a coffee table book with great, clear illustrations & a fairly thorough introduction to jellyfish biology. I doubt experienced marine biologists with an interest in the subject will learn a lot of new things from Gershwin, but for the general public the book is detailed nonetheless.

As a reading experience, the format gets a bit monotonous towards the end, especially as the final chapter is the least interesting of all, with the least depth. Still, let me be clear: this is – by far – the best book on jellyfish available. If you want more, you’ll need to dive in the world of scientific journals.

The book shows there is an enormous variation in jellyfish: there are much more differences between some species of jellyfish than there are differences between humans and, let’s say, turtles, or cod, or jays. On the other hand, salps are more closely related to humans than bees or scorpions. The list of nuggets at the end of this review shows a bit of this diversity.

The other important takeaway is a strong reinforcement of the realization that science has only begun to understand and map the diversity of complex life on our planet. Most stuff about jellyfish remains undiscovered and unknown, including basic stuff like the life cycle for lots of species. It’s like Nigel Pitman wrote in an article for Nautilus in 2015: “What the models tell us is that several thousand of the tree species that grow in the Amazon are so rare that scientists will never find them.”

Let me finish this review with some nuggets of knowledge I want to remember:

– Taken as a group, jellyfish have 13 different ways of cloning themselves.
– The term ‘jellyfish’ actually covers 3 phylums (or 2 if you don’t include salps).
– Their diversity is underestimated: there are at least 4,000 species of medusozoans, 100 species of ctenophores and 110 salp species. Together these creatures span three phyla, eight classes, and 27 orders.
– Salps belong to the same phylum, Chordata, as humans. They are the last common invertebrate ancestor for all vertebrates.
– Jellyfish came into existence before blood, brains and bones evolved.
– The stinging cells of Cnidaria (one of the 3 main groups) discharge their ‘harpoon’ with a force of 40,000 Gs.
– Pulsating is very energy efficient form of swimming: it “uses only half as much energy as any other organism would for the same propulsion.”
– Brains in other organisms have evolved from a middle skin (mesoderm), which jellyfish lack: the area between ectoderm and endoderm is usually just filled with jelly.
– Some jellyfish are farmers rather than hunters.
– Certain jellyfish are able to regenerate completely from just 1/4th of their body.
– Some jellyfish are able to concentrate heavy or light ions to facilitate vertical migration.
– Turritopsis dohrnii, a Mediterranean species, seems to be immortal in at least a couple of definitions of the word, and, on top of that, is also able to become young again: its genes allow what would be the “equivalent of a butterfly turning back into a caterpillar or an apple into a tree.”
– Some sea slugs incorporate stinging cells of jellyfish they have eaten in their own skin for their own defense.
– Oikopleura build several mucous houses a day for themselves.
– Some jellyfish have polyps that grow in or on other jellyfish.
– Some jellyfish even have forms of courtship.
– Lots of jellyfish can clone themselves, but that doesn’t mean the resulting individuals display the same symmetry. Lots of jellyfish can do both cloning and sexual reproduction, and counter-intuitively sexual reproduction usually means more symmetrical stability in certain jellyfish. “The genetics underlying this phenomenon are unclear.”
– The reason for this symmetry variation however has to do with uncertain future conditions, and more differences in symmetry cover more future ecological niches for the exact same genetic material (as they are clones).
– Only since 1995 have scientists began to realize the importance of jellyfish for changes in marine ecology. That’s mind-boggling. It goes to show that up until about 25 years ago biologists completely failed to understand sea ecology.
– Jellyfish occupy the niche of top predator in a low-energy food chain, that is in a way parallel to the more conventional food chain. They existed millions of years before complex animals even appeared. They can benefit from and compete with more complex animals, but they don’t need them.
– There’s at least two unrelated comb jellies that can spurt an ink as defense, like some octopuses and squids.
– Certain jellyfish have small crabs and even barnacles living on their bells.
– Atolla developed a deep red colored stomach “to mask any bioluminescent light emitted by struggling prey within”, so they remain out of sight themselves.
– 90% of jellyfish are so small (less than a cm) they are invisible to humans.
– Some species have blooms that stretch for 1500 km.
– Genes from the Aequorea victoria for bioluminescence are used in humans to produce a green fluorescent protein “to improve cancer surgery and track brain development”.
– On open door maybe, but I’d never considered it before: the ocean is the most homogeneous ecosystem on the planet. It’s mostly just water with a fairly constant temperature of 4° C.

This short book by Helen Ferguson (née Woods) – troubled only child of a wealthy British family – was published outside science fiction at first, but as Brian Aldiss named it the best SF novel of 1967, it was picked up by science fiction readers. Note the difference in marketing between the first cover (pictured to the left), and the 1974 cover by Gene Szafran, pictured below.

She adopted the name Anna Kavan – even as a legal name – in 1940, after the heroine of two of her previous novels.

I thought Kavan was too explicit in how she deals with the themes: “In a peculiar way, the unreality of the outer world appeared to be an extension of my own disturbed state of mind.” or “Reality had always been something of an unknown quantity to me.” There’s over a dozen of sentences like this in about 150 pages. While lots remains elusive in this book – including definitive interpretation, it paradoxically also spoonfeeds the reader the entire time.

Not that this short novel is not rich thematically – addiction, victimhood, Cold War nuclear angst, abusive relationships, abusive parenting, psychiatry, trauma – but those themes can’t really fight their way out of the explicitly surreal frame, except maybe when the surreal is taken as a metaphor for mental instability – in which case that one theme dominates all the others, as the surreal form of this book overshadows all else. On top of that, these themes aren’t really explored in depth, and there’s heaps of repetition.

Because of a vague subplot concerning some kind of military bureaucracy, I’ve read comparisons to Kafka, but that doesn’t hold true for me. Kafka managed to nearly always instill a sense of urgency in this work, while Kavan can’t keep the random parts in check: the fact that everything is possible results in a feeling that nothing really matters, except for the instability itself. Kafka also keeps motivations & human reactions realistic, while in this book political operators act as children and the schizoid takes center stage.

There’s some truly great prose here and there, and a few great, harrowing scenes, but again, the good is flanked by too many & too explicit mentions of the “derealized” setting, “chaos” and “contradiction”. We get it already.

Obviously, at face value, if taken solely as what it might wanted to be – a representation of mental instability & obsession – the novel is a clear success.

So: 100% a matter of taste – I’m not really a mood/fever dream reader: I didn’t like Vandermeer’s Annihilation either. For a glowing review, check Joachim Boaz’ Ruminations. 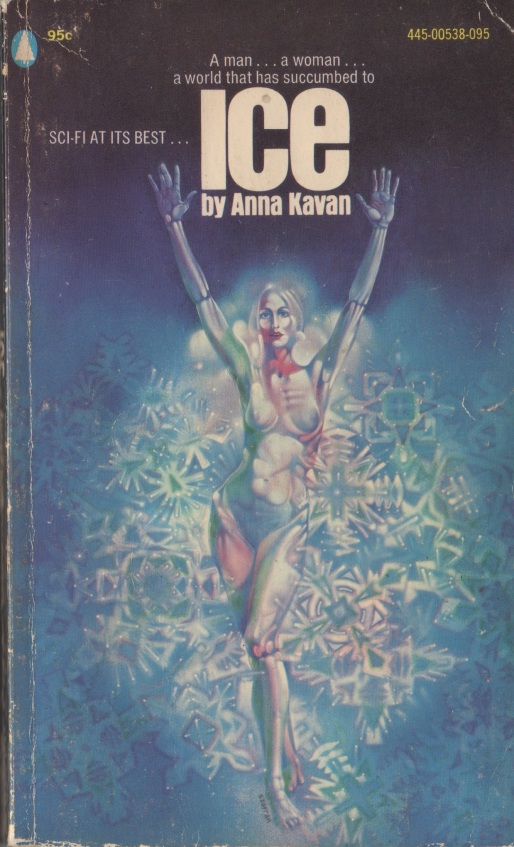