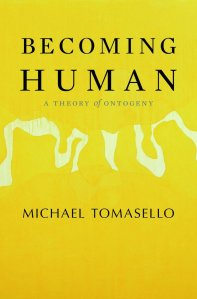 I’m always eager for the year-end list of David Auerbach at Waggish. The man is a voracious reader in all kinds of domains. 2019’s list was dauntingly long, but I found a few titles right up my ally, one being Becoming Human: A Theory of Ontogeny by Michael Tomasello, Professor of Psychology and Neuroscience at Duke. Tomasello is one of the few scientists bridging developmental research on both primates and children, and a leading figure in a branch of evolutionary psychology that was new to me: human ontogeny.

Tomasello’s scope is large. He ties the development of human cognition and human sociality together, resulting in synthesizing insights about social norms & moral identity. This in not only a comparative psychology book, but an important work on ethics too. Truly a tour de force, and the first theory I’ve come across that convincingly brings cognition, evolution and ethics together – not in a normative way, but by describing the pathways of how these things arise, starting with newborn babies.

Tomasello builds on the seminal insight of Lev Vygotsky, who in the beginning of the 20th century was one of the first to articulate the fact that children need a social context to develop fully. A child that would be put onto a desert island without any social interaction would not become ‘human’ as we generally define it.

To further sketch the content, let me first quote the blurb from the publisher – Harvard.

Tomasello assembles nearly three decades of experimental work with chimpanzees, bonobos, and human children to propose a new framework for psychological growth between birth and seven years of age. He identifies eight pathways that starkly differentiate humans from their closest primate relatives: social cognition, communication, cultural learning, cooperative thinking, collaboration, prosociality, social norms, and moral identity. In each of these, great apes possess rudimentary abilities. But then, Tomasello argues, the maturation of humans’ evolved capacities for shared intentionality transform these abilities—through the new forms of sociocultural interaction they enable—into uniquely human cognition and sociality. The first step occurs around nine months, with the emergence of joint intentionality, exercised mostly with caregiving adults. The second step occurs around three years, with the emergence of collective intentionality involving both authoritative adults, who convey cultural knowledge, and coequal peers, who elicit collaboration and communication. Finally, by age six or seven, children become responsible for self-regulating their beliefs and actions so that they comport with cultural norms.

At first, I was a bit suspicious of Tomasello’s claims: I have read quite a lot of Frans de Waal and the likes, and my intellectual stance the last decade or so had been to not overestimate human uniqueness – not in language skills, not in cognition, etc. I considered differences between humans and other animals basically a matter of degree.

To a certain extent this obviously still holds, but one of the merits of Tomasello is that he uses large sets of experimental data that clearly show there are two things that are unique in humans: “shared intentionality” and “collective intentionality”. Basically, the fact that we humans do things together, know that we do things together and have elaborate insights in other humans’ mental states that influence our own mental states. So it’s not only cooperation itself that is important, but the fact that it is a form of recursive cooperation.

Language obviously is important for all of this, and so this is not only an ethics book, but one that should interest linguists too. The same goes for the cultural transmission of knowledge: instructed learning basically doesn’t exist in the rest of the animal kingdom, so yes, pedagogy too.

Rather than try to summarize Tomasello’s theory, in the remainder of this review I’ll do two things: first I’ll list an extensive amount of the information I found particularly interesting – take a look I’d say, it’s the juice of this review – and I end with a short bit on the book as a book: a few words on my reading experience, not the theory itself, so that interested readers better know what to expect.

Before I get to that, I need to make one more thing loud and clear about Tomasello’s theory itself. The praise on the back of the book is very, very high. Other professors call this a “landmark in our understanding of human development”, a “scientific masterpiece”, “destined to become a classic”, “theoretically daring” and “astonishingly generative”. From my own limited perspective I’d say this praise is justified, and I learned a lot. I have a background in linguistics, and I have to say the chapter on communication is fantastic. I’d even say reading this book shifted my paradigms a bit – or at the very least refocused them on recursive cooperation as the quintessential aspect of human nature. Humans are not individuals – John Donne was right when he wrote ‘No Man is an Island’.

As for a thorough summary, best to watch Tomasello himself: there’s a one hour talk on YouTube, and he shows loads of videos from experiments too. It’s basically a synopsis of the book.

The list bellow isn’t exhaustive, nor is it an attempt at a summary. It’s just things I want to remember from this book myself. I quote disproportionately from the language parts of the book, but there’s other great stuff too, on guilt, ethics, autism, hunter-gatherers, the birth of reason and something very surprising about Frans de Waal’s famous capuchin monkeys.

A few final words on the book as a reading experience.

Becoming Human has 379 pages, including about 30 pages of references and a 7-page index. The prose is clear and steady. Every chapter or subchapter starts with a broad outline of the particular topic, then focuses on what we know of the matter from great apes, moves to an overview of all the relevant experiments with human children, and ends with a summary. If they are available, Tomasello also explores the data for possible intercultural variation and children with autism. There are introductions to sections that basically repeat stuff too, and at the very end there are about 40 pages that are mostly a summary of the entire book. So, as a pure reading experience it’s not fully successful: there is too much repetition. But, this is not a popular science book, and as such should not be judged that way.

All the repetition allows for other scholars to just read a particular chapter of the book depending their needs, and also the broad introduction that’s a summary of some sorts, as is the summary at the back, are great for professionals to determine what parts of the book they might want to read in more detail.

Likewise, for the casual reader – like myself – the never-ending flood of experiment after experiment can become a bit tiresome at times. Not that this stops being interesting – all the experiments are interesting in and of themselves – yet there are so, so many of them. Again, from a scientific point of view, this is only a plus. Tomasello cements his theory more than firmly: it’s rock, rock solid. He also refutes some criticism, taking a middle ground between ape “scoffers” like Povinelli, Vonk, Lurz and Heyes, and ape “boosters” like de Waal and Boesch. He does so convincingly, if you ask me.

Obviously, this theory is not fully complete, and the book ends with prospects for further research.

So: casual readers beware / this is highly recommended.

14 responses to “BECOMING HUMAN: A THEORY OF ONTOGENY – Michael Tomasello (2019)”