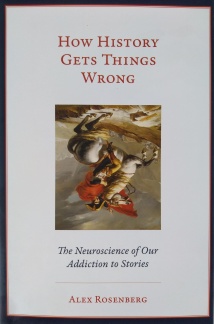 Darwinian Reductionism, Or, How to Stop Worrying and Love Molecular Biology – a book Alex Rosenberg published in 2006 – was one of the best books I read in 2019. It tries to marry physics & chemistry with biology, and successfully so. It’s a very dense text, and extremely interesting.

So when I learned Rosenberg had written a book about our addiction to stories, I couldn’t resist and bought it. These 291 pages are a very different read than Darwinian Reductionism: a whole lot more accessible, written for a somewhat larger audience – although this is still no pop science book. While not without problems, it is very much worth your time if you have a serious, academic interest in human behavior, theory of mind, and narrative – Rosenberg’s scope is both broad and deep.

How History Gets Things Wrong: The Neuroscience of Our Addiction to Stories biggest shortcoming is its title. It’s great from a marketing point of view, but it is a bit misleading. Yes, history features, as do stories, but in the end, they are a sideshow. Rosenberg uses the fallacies of narrative history to frame his central argument, which is a refutation of the most commonly held (folk) ‘theory of mind‘. He does so mainly with recent findings from neuroscience. Let me quote Wikipedia to give you an idea of Rosenberg’s basic line of reasoning:

This work develops the eliminative materialism of The Atheist’s Guide to Reality, applying it to the role ‘the theory of mind’ plays in history and other forms of story telling. Rosenberg argues that the work of Nobel Prize winners, Eric Kandel, John O’Keefe and May-Britt Moser along with Edvard Moser reveals that the “theory of mind” employed in every day life and narrative history has no basis in the organization of the brain. Evidence from evolutionary anthropology, child psychology, medical diagnosis and neural imaging reveals it is an innate or almost innate tool that arose in Hominini evolution to foster collaboration among small numbers of individuals in immediate contact over the near future, but whose predictive weakness beyond this domain reveals its explanatory emptiness.

It has been over a decade since I read something truly substantial on the neurological working of our brain, and I was surprised by the detail in the discoveries of Kandel, O’Keefe and the Mosers. Their findings about the nature of brains – ‘place cells’, ‘grid cells’ and especially the functioning of ‘sharp wave ripples‘ in how decisions happen – strengthen a materialistic, reductionist viewpoint of behavior. The chapter in which Rosenberg describes the research is truly fantastic, eye-opening and worth the prize of the book alone – but I’m sure there are other good texts about that if you only want to read about that subject. In 2000 and 2014 the research was awarded a Nobel Prize, so this is not some obscure theory – as such, it might be old news to some, but it was not to me.

It’s refreshing to read a whole lot more than the typical stuff on the experiments of Benjamin Libet and John-Dylan Haynes on the fact that our brains make decisions before our consciousness registers it – a staple in popular texts on free will and similar subjects. Mind you, this is not a book on the non-existence of free will. Rosenberg says that free will doesn’t require consciousness, indicating he sees the term a bit differently than most. Although the book doesn’t deal with it explicitly, there is a lot between the lines.

It’s also of note that the book deals extensively with representation, as a big part of Rosenberg’s argument hinges on the fact that there are no representations of desires or beliefs to be found in our brains. These play a crucial role in how we generally perceive how humans act: we do stuff because we desire something and we act on those desires based on certain beliefs about how to attain them. We think somehow representations of these beliefs and desires are found in our brains, and that our brains somehow process these desires and beliefs, and make decisions based on that. Not so, it turns out.

One more remark before the jump, a crucial one. Neural circuits in the brain do not have content or represent something indeed, but it is obvious that their material output (our speech, our writing, to a certain extent maybe our conscious thoughts as well, …) does. The brain lacks content, sure, but it forms content. I would think that you cannot treat the brain as a closed system, and that we need to take its extensions so to say into account as well.

I’m not sure what this means for Rosenberg’s overall theory. Maybe it is not much more than a matter of sharper definitions. Rosenberg talks about cell circuitry that does not ‘represent’ or ‘interpret’ etc. – but again, what about their output? Is that part of the brain as well? Or part of its representation/interpretation/aboutness?

In the rest of the review, I’ll talk a wee bit about the book’s most important formal problem, and end with a list of a few of the nuggets of wisdom I found.

The book’s major problem is its repetitiveness. Rosenberg wants his arguments firmly made, so he spells out his reasoning fully, again and again. In a way, he builds a solid layer cake, but starts from the base each time. Add to that that the separate chapters try to be more or less self-contained arguments. The result is too much repetition for my taste – Rosenberg’s editor should have been stricter. On the other hand, the repetition makes it easier to follow, so it’s not a deal breaker.

In its formal defense, it should be noted the book has a great flow, going from chapter to chapter, and Rosenberg’s prose is solid. He also offers some interesting tidbits of information about stuff tangential to the book’s subjects down the line – like the fact that “Gulag” was originally an acronym for the authority that ran the camps before talking about Solzhenitsyn’s famous The Gulag Archipelago.

There’s much, much more to this book than the list below. It is also clearly not an attempt at a summary. These are just some of the things I want to remember myself.

If you’re interested in the book, maybe read this fairly short interview with Rosenberg first, it will hopefully help you in deciding whether or not to read it – it provides a very broad summary.

This entry was posted in Reviews and tagged Alex Rosenberg, Biology, History, How History Gets Things Wrong, Neurobiology, Neuroscience, Non-fiction, Philosophy, Representation, Review, The Neuroscience of Our Addiction to Stories, Theory of Mind. Bookmark the permalink.