I’m rereading The Book of the New Sun at the moment, and while I first thought to just read Shadow of the Torturer, it felt wrong to write a review of the first volume only, so I’m going to finish all 4 volumes and then write on the entire thing.

That means no new speculative book review for now, but two very different books on the brain. First a scientific account of rationality and neurobiologic algorithmic decision making, after that an art-science hybrid: a catalogue of historical pen and ink drawings by neuroanatomist Cajal, which includes a biography and some other text on the matter.

This is the English edition of the 2015 French publication Matière à décision, but updated with new data, some mistakes corrected and also partly rewritten structurally – with a new chapter added as the most striking change. As such, I’d very much call this a 2020 book indeed, and that’s of note in an ever evolving field.

The basic question this book tries to answer is whether neurobiological science supports the case for rational decision-making. It does so by using a bottom-up approach, “beginning with the neural matter and tracing the journey of how decision-making might have emerged from the physicochemical interactions between its components.”

This book is a strange hybrid. It both tries to give a short overview of the philosophical debate and the history of the science involved – including a bit of behavioral economy – and it tries to answer the question using an algorithmic model based on actual vertebrate brain science.

The sections concerning the former were interesting, but I can’t say I learned a lot, it’s generally standard fare if you’re familiar with the field. Having said that, I do think they were successful in grounding the other part of the book in a bigger story, and Boraud did manage to hold my interest with his smooth, matter-of-fact style – even if some of his ironic footnotes and epigraphs feel out of place at times.

The sections that went deep into the nuts and bolts of the neurological structure of decisions were another matter. I did learn new stuff here, and Boraud offers an interesting model, but at the same time big parts of this went over my head. Not that a more careful, slower reading wouldn’t have yielded better understanding, but for me – not a specialist nor a scholar on the matter – some of these sections were simply too detailed for my needs. As such it was a bit of a disappointment for me, as these sections are ultimately what the book is about – the main course of what Boraud has to offer. Depending on your own background however, these sections might be highly relevant to you.

For certain parts of the book I thought I was reading a pleasant introductory philosophy course on rationality, only to be suddenly dropped into a pretty technical, detailed neuroscience paper. For me it would have been better if Boraud had added 40 or 50 pages to provide some more explanation, context and build up for the technical parts, and made them more accessible. Then again, brevity is one if this book’s fortes too.

I think Alex Rosenberg did a better job in providing insight to the non-specialist in how the brain works in his 2018 How History Gets Things Wrong – The Neuroscience of Our Addition to Stories – a book that is maybe mismarketed, as big chunks of it deal with the question of the neural reality of ‘mental representations’, and as a result is partly about neural decision making as well. That said, Boraud’s model is definitely more specific than Rosenberg’s account, so the books are compatible. (On a sidenote, it would be interesting to read Boraud’s response to Rosenberg’s tackling of mental representation.)

I do have one fundamental criticism. The short chapter on free will is underdeveloped, because Boraud takes an uninteresting definition of free will to start with, namely Descartes’ “the power to elect and the freedom to choose”: obviously humans can elect and have a certain freedom to choose.

While I agree on his criticism of Libet-as-an-argument and the general vibe of this chapter (maybe neuroscience can’t offer that much of help to the debate, and the importance of the distinction between agency & intentionality), I do think it would have benefited to start with another definition: free will as the ability to choose differently in the exact same circumstances – maybe neuroscience would be of help answering in that case.

I also can’t understand Boraud claiming Daniel Dennett’s compatibilist position more or less settles the matter, the “debates seem to close at this point” – that isn’t the case at all, even though Dennett and his ilk like to claim so. Dennett himself has pointed at a 2009 poll, in which over 59% of leading experts concur with compatibilism. I’d stress that’s only 59%, and while the poll was held among experts, they were mainly philosophers, not hard scientists (“3226 respondents, including 1803 philosophy faculty members and/or PhDs and 829 philosophy graduate students”), so I don’t think it’s bold to claim that disagreement with a significant part of those concurring answers will probably boil down to semantic discussions on how to interpret the term “free will”. That poll simply is not fine-grained enough to use as an argument on the matter – regardless of more fundamental objections to using a poll as an argument in this debate.

So, all that leaves me a bit in two minds about scoring this. As a reading experience I’d say 2.5 or 3 stars, but I’m still going for a 4 for the science, as that is what it is ultimately about. And just to be clear: Boraud is not some philosopher with an interest in neuroscience – as the authors of so many of other books that appear in this field. He is a neurobiologist, and much of the findings in this book resulted from the groundbreaking Parkinson research he and his colleagues did.

If you are a brain scholar, a scholar in the broad field of theory of mind, behavioral economy, or even a computer scientist interested in algorithmic decision making processes, I would definitely recommend this. 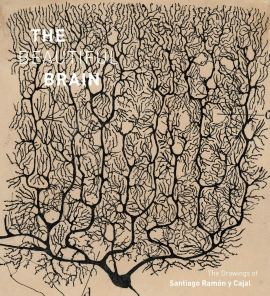 1906 Nobel laureate Santiago Ramón y Cajal (1852-1934) was the father of modern neuroscience, and this book offers a small selection of his 2,900 drawings, with some accompanying texts. It was published on the occasion of a traveling exhibition that opened at the Weisman Art Museum in Minneapolis in February 2017. Normally his drawings are housed in Madrid.

As an art book it failed to catch my interest: very repetitive. The drawings simply were not intended as art, and that shows. This is not to play down Cajal’s skills as a draftsman or scientist, not at all – it’s just that, for me, these drawings don’t do anything. Generally drab, boring to look at.

A matter of taste, obviously, as the exhibition got rave reviews – take a look here, with some more high resolution pictures to see if they appeal to you. That link is recommended, and somehow these drawings look better on a luminous screen than as a reproduction on paper in the book.

As a science book on the brain, neurons and nerves, it is too fragmented to be of use, although apparently some of his drawings are still in use for teaching purposes. However, it should be of tremendous interest to students of the history of neuroscience. It ends with a short chapter of a few pages on contemporary brain imaging.

Should you consider buying it, here’s a video of a guy thumbing through it entirely:

Click here for an index of my non-fiction or art book reviews. Here‘s an index of my longer fiction reviews of a more scholarly & philosophical nature.

The author index includes my fiction reviews, and here are my favorite lists – including a list of favorite non-fiction.