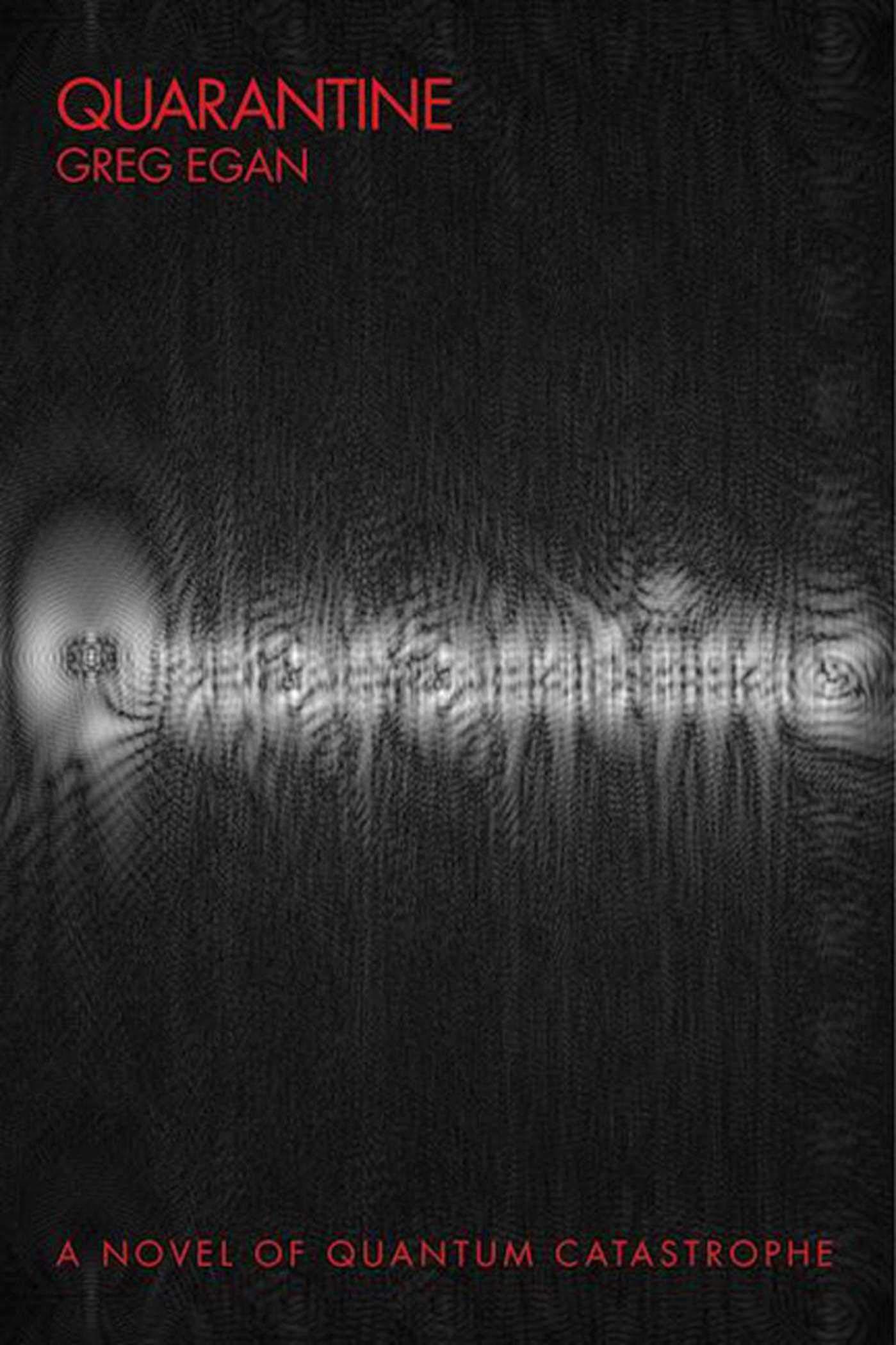 Greg Egan’s first novel, An Unusual Angle, was published in 1983, Egan being 22 at the time. It “concerns a high school boy who makes movies inside his head using a bio-mechanical camera, one that he has grown.” Nine years later, Quarantine appeared and instantly removed all doubts about Egan’s erstwhile juvenile talents.

What starts as a detective set in 2067 quickly turns into a head spinning novel about the possible existential effects of the Copenhagen interpretation of quantum mechanics – more specifically the consciousness causes collapse variant. In short: humans observing stuff limits the number of possible worlds.

If you thought the popcorn sci-fi of Dark Matter was hard, well, this is the real deal. On the other hand, compared to the only other Egan I’ve read so far – the brilliant Schild’s Ladder – this is an easier, more accessible book.

The first half is smooth reading: Nick Stavrianos, a hardboiled PI, investigates a kidnapping/closed room mystery. The specifics of the setting – Earth quarantined by “an impenetrable gray shield that slid into place around the solar system” in 2034 – seem a cool yet inconsequential backdrop at first. It’s brilliant how Egan manages to weld the two mysteries together.

The same goes for the other science fictional thing Quarantine features: mental modifications people install in their brains via nanobots. Again seemingly gimmicky in the first half of the book, it nonetheless gives the detective story a futuristic, exciting edge that would not be out of place in a Hollywood action flick.

But as the story progresses, Egan first uses the mental mods to make serious observations about free will and what authentic emotions entail, and when the book hits full gear the mods also prove to be crucial to further the plot – multiple times. On top of that, he also manages to comment on social cooperation via one particular mod.

It is the hallmark of economic writing: do multiple things with one idea. There are only 221 pages, and the book is tightly plotted – so much even that the sci-fi gimmicks that lure in the unsuspecting reader turn out not to be mere gimmicks, but vehicles for existential philosophy.

Egan uses his story to show the consequences of a theory that seems entertaining –  a specific form of the multiple worlds theory – but when thought trough might not be so entertaining at all.

That is the hallmark of great science fiction: using fiction to illuminate possible scientific realities – in this case to explore “what quantum mechanics tells us about the fundamental nature of reality.” The caveat here is that Egan chose the set-up mainly for its entertainment value, not because of its plausibility. Moreover, in a 2008 essay on his website, he corrects two of the scientific mistakes he discovered in retrospect – it’s interesting, but has spoilers. Egan’s honesty shows his deontological attitude, just as the anecdote with which I started my review of Schild’s Ladder.

While all that science talk may sound dry or boring to some, rest assured: the book retains its noir mystery aura throughout its 221 pages. One only needs to buckle up for some serious quantum augmentation, and that means a bit of slower reading, starting about the halfway mark. Being forced to slow down to take everything in isn’t bad: Quarantine kept my mind limber, and that’s just how I like it.

Some sites group this book as part of a series – Subjective Cosmology – but the books aren’t related, except for a shared conceptual angle. So don’t worry about getting sucked into a long story, this is a stand alone. Still, you might get sucked into reading more of Greg Egan’s oeuvre. The book hardly feels dated, and there’s not much to improve – I might have added a few pages to flesh out certain stuff a bit more.

Recommended, and a good place as any to start Egan. 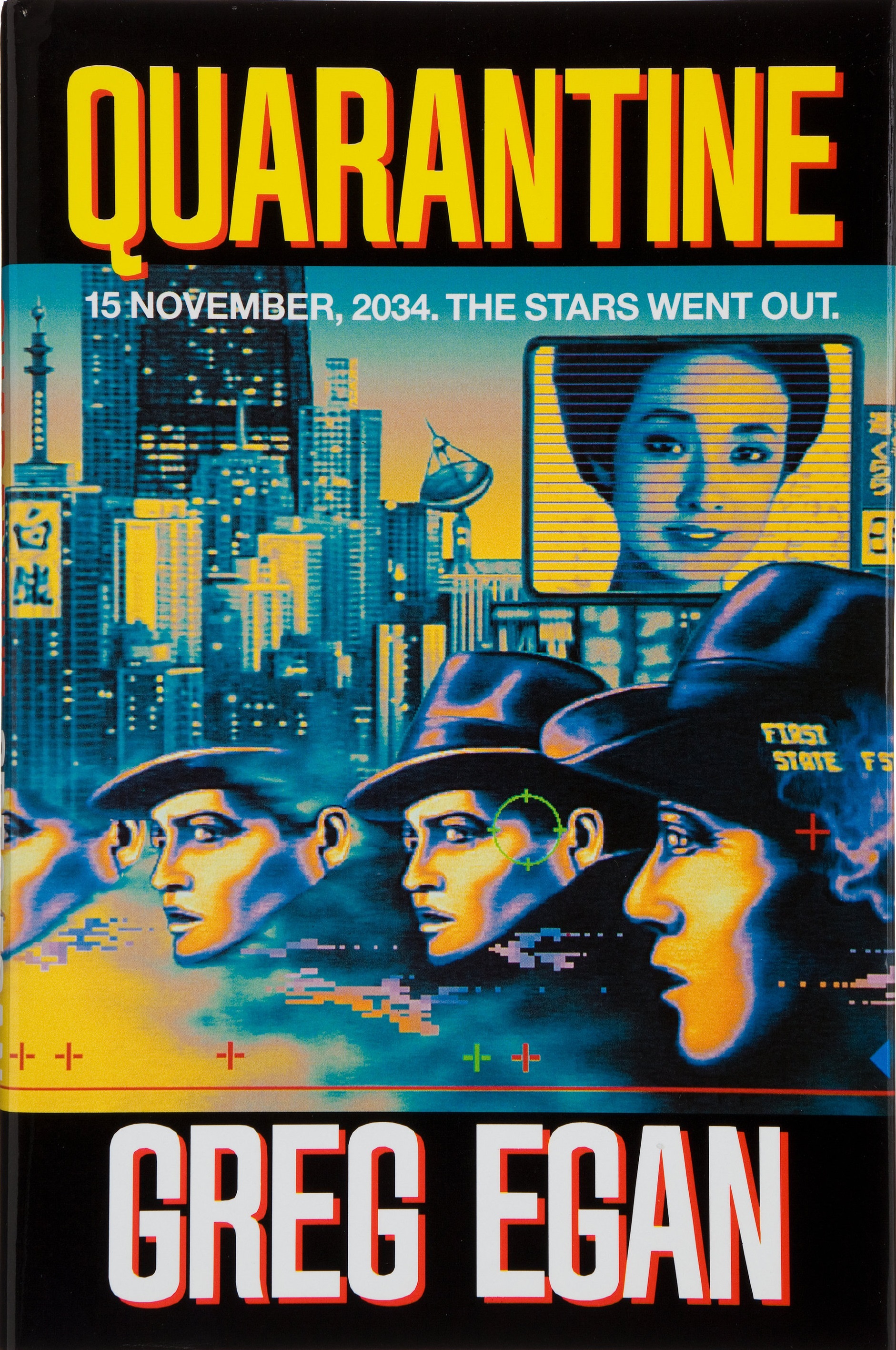 Terrible first edition cover. The 90ies were a general disaster for all matters of style, and computer graphic design was in its infancy. Add to that an impossible conundrum for the artist: a book that starts as a cyberpunk detective and morphs into applied quantum mechanics…