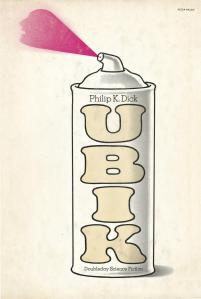 When I read Do Androids Dream of Electric Sheep? 5 years ago, I approached it the wrong way. That novel is full of plot holes & other inconsistencies, and while I appreciated the mood, I ended up being bothered by its mushy core. I decided to not make the same mistake for Ubik, and see if a go-with-the-flow attitude would yield another reading experience.

Being who I am, I still ended up writing down numerous inconsistencies, but indeed, they did not really bother me. Maybe that is because Ubik simply is a much better novel, I don’t know: I’d have to reread Androids, and that’s not going to happen.

A bit before I started Ubik, I read a review on Calmgrove that determined my reading experience this time. It hinted at Serious Levels of Depth, and that provided the novel with lots of my credit upfront. It made me go down another rabbit hole this time: in search for truths about life & death.

For the uninitiated: Ubik is a strange novel, in which Dick draws back the curtain numerous times, only to close it a bit later on. It involves time travel – or not?, strange temporal digressions, merged states of half-life, a conflict between two psychic mutant factions, a trip to the moon and capitalist consumerism satire. An American-made Kafka: light in calories, and with a dose of cigarettes, X-Men & half-baked religion.

It’s a bit weird, yes, but I don’t think Ubik is that difficult if you just go with the flow. Inception is a much, much bigger mindfuck. The paradoxes Dick presents aren’t exactly quantum science, and when all is said and done it’s all pretty straightforward: this novel is about epistemological uncertainty. Can we be sure of anything? Aren’t we dead yet? Is this a dream? Questions that are as old as Zhuang Zhou’s story about the butterfly dream and Plato’s cave. What is the Matrix? You know the drill.

Philosophically, I’m not sure if Dick brings anything new to the table, two and a half millennia after the Zhuangzi or the Republic. Some go pretty far in attributing mad genius to PKD, like Melissa Rininger in her answer to a Goodreads question about the very end:

The coin is a reference to Plato. Wisdom is the key to unlocking the metaphysical question of reality: “There is one true coin for which all things ought to be exchanged, and that is wisdom.” Dick constructed the world of Ubik in a Platonic system: Theory of Knowledge, Theory of Forms, and the Conception of the Tripartite Soul. By the end of the novel, Joe Chip uses Socrates method of dialectics to see the difference between empirical reality and absolute Forms. He becomes the logistikan (logic), Ella represents spirit, and Jory represents appetite. Once wisdom (logic) overcomes the body’s appetites, then logic/spirit/appetite align as one and they transcend–becoming the Total Man. The coin represents their transcendence and becoming One with God/the Immanent Mind/the Immovable Creator/the Univeral Being/whatever-you-want-to-call-IT. Ubik is a cosmological explanation for Dick’s schizophrenic hallucinations and visions. The coin implies the nature of reality is cyclical and the direction of movement is circular depth, not linear.

I’m not buying that. Even if Dick intended it that way – which I doubt – it still amounts to baloney. Even if there are fragments in The Exegesis of Philip K. Dick to corroborate Riniger’s interpretation, I still think it’s way off with what is actually written: there are no absolute forms in the book as far as I can tell.

Snorting tons of speed will do that to you. Amphetamines make you amazed by your own contraptions. It’s to Dick’s credit that he manages to convince others to listen in: this guy could write for sure. Drugs fuels creativity, yet it also kills your internal editor. In the case of Dick, I think it might have diminished him. People like to revel in counter-culture and the rebellion inherent in dope, and easily subscribe to the substance free-your-mind narrative that is so dominant in our culture, so nobody asks the hard question: could it be that Dick would have been a better writer if he had been less spaced out? Writing novels is not making music.

Back to the book. I guess I’m not done with reading Dick, as Ubik is very entertaining. Like so many other books from that period, it is a bit dated in certain respects, but not so much it spoils the fun. The mood is great, at times the prose is too. The satire is nice, even though Brunner did it better – sharper, deeper. The story is creative, a roller coaster, and if you just go with the flow, you’ll have a great time – never mind all the mind-body & interface problems Dick just sidesteps, never mind zero character development, and never mind the unresolved central conflict with Ray Hollis: that was just a sideshow anyway. Ubik‘s puzzles keep the mind occupied, and the resolution is satisfying. (If you’re interested, Manuel Antão wrote an excellent, glowing piece, pointing out most of the important open questions/plot holes, and at the same time offering a valid way out.)

Just don’t go in thinking you’ll learn a lot. PKD is not a philosopher. And while his point here is more interesting – and more valid – than the philosophical mess that is Do Androids, it’s also a horse that has been flogged to death for over 2500 years. It’s only fitting the American version of said activity feels like a Disneyland dark ride inspired by the Dutch MC Escher. The real deal, but not quite. 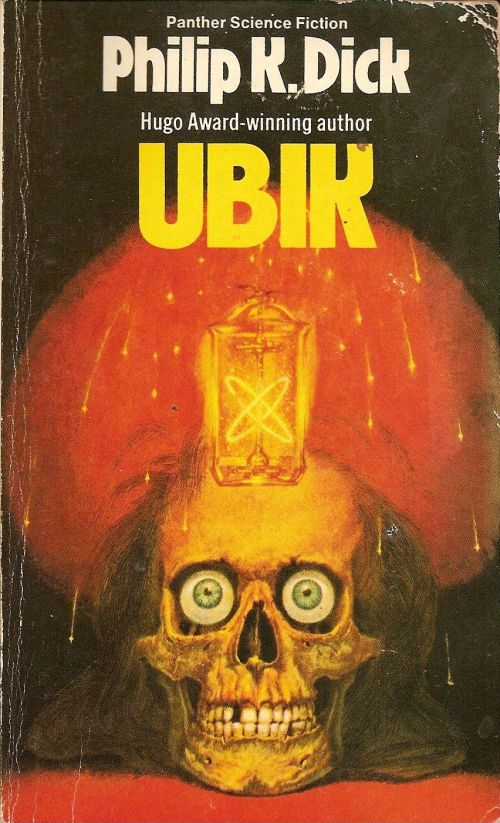