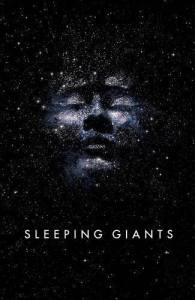 Let’s just dive right in: this debut by Canadian author Sylvian Neuvel is extremely entertaining, but its plot is quite a mess. It has been compared to The Martian, and while it shares similarities, it is a different beast altogether. Sleeping Giants starts with the discovery of a giant robot hand, buried thousands of years ago, alien in origin. A high paced conspiracy SF thriller ensues, following the scientists and military personnel that try to uncover the hand’s secrets.

It shares lots of surface details with Andy Weir’s hit: it’s a debut, it was first self-published, it’s set more or less in our own timeframe, it has a kind of witty quality, the pacing is relentless, and – maybe most importantly – the movie rights sold instantly, a motion picture is on its way. As it reads like a blockbuster, that’s no surprise at all.

Blockbuster, warts and all: plot weaknesses are abundant.

There’s a few minor spoilers in the next paragraph, but I’ll keep it vague & nondescript.

Would the US military hand over its most important find ever, and just give up researching it because the guy in charge clearly isn’t on top? Even think it might not be alien while it clearly is, as per simple spectrography? Could one person with no military experience be in charge of the defense of a nation, resulting in the possible invasion of another? Would a few people be allowed to operate alien technology unsupervised? Even be allowed in the compound were that technology is held unsupervised? Would that compound be below a lively civilian structure? Esp. if you know that that compound holds the most important military finding ever? A finding that might erratically explode whenever, doing potentially more damage than 100 nukes? Wouldn’t the airspace above such a compound be clear, and highly guarded 24/7? Would important scientists working on the project be deported all of a sudden? Or even be allowed to leave with top secret knowledge in their heads? Etc.

While the science in The Martian has been debated, at least Weir tried to be consistent, and true to reality as best as he could. Neuvel doesn’t even try. I’m not saying this is as brainless as Michael Bay’s Transformers franchise, not even close, just don’t expect meticulously researched scientific/military/political intrigue. A better comparison would be Ridley Scott’s Prometheus: stylish & entertaining, yet also involving professionals who should know better doing things they shouldn’t do.

The book is formally quite unorthodox: 95% of it is a succession of transcripts of interviews with the scientists and soldiers, all done by a mysterious interviewer that works for a shady, mysterious organisation that could be the CIA. The other 5% are excerpts of journal entries and mission logs. The interview form, set in a quite big font, makes for 304 pages that are read in a couple of hours, easily. Neuvel manages to insert enough attention to characters – it is not only info dump as one could expect from a Q&A.

A part of the novel’s appeal is the character of the mysterious interviewer: a pragmatic – if not cynic – know-it-all with a deadpan way of talking to his subjects. The tone of the questions does get a bit repetitive near the end, but Sleeping Giants is short enough to prevent the form to become a drag. The last 50 pages even felt rushed. The other main part of the book’s appeal is simply the mystery: partaking in the discovery of the alien artifacts is a joy, and Neuvel puts in enough interesting ideas to keep readers intrigued.

I suspect that I would have hated Sleeping Giants if the tone of the book had been a bit more serious, but luckily that wasn’t the case: the entertainment factor managed to trump the messy plot. As light summer reading, this is recommended. I will probably read the next book in the Themis Files as the story isn’t finished, the cliff-hanger was surprising, and Walking Gods promises to be just as much fun & mysterious.