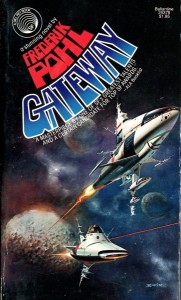 Gateway is a famous book. It’s one of the few novels that won 4 major prizes: the Hugo, Locus, Nebula and Campbell award, and it’s on numerous essential SF lists.

While it’s perfectly self-contained, Pohl wrote 5 sequels: Beyond The Blue Event Horizon (1980), Heechee Rendezvous (1984), The Annals Of The Heechee (1987), The Gateway Trip (1990) and The Boy Who Would Live Forever (2004). Together with the 1972 novella The Merchants Of Venus, and The Gateway Trip – a short story collection that appeared in 1990 – these books form the Heechee saga.

The Heechee are a mysterious alien race that explored our Galaxy hundreds of millennia ago. Near Earth, they left structures on Venus, and – crucial for this novel – a space station in an asteroid, including functional spaceships. Humans can operate these, but don’t really understand the technology.

The basic premise of Gateway is brilliant: humans embark on voyages in these ships, but it’s a bit of a lottery. Most of the time, crews do not know where they’ll end up – there might be proverbial gold at the destination, but more likely it’ll be just a barren planet, or worse, mortal danger. The link with prospecting in the Wild West is easily made.

The other thing that makes the book stand out is the fact that Pohl alternates between the story of the protagonist – Robinette ‘Bob’ Broadhead – enlisting on the Gateway station, a poor, lost soul trying his luck; and the same guy, years later, after a mission that made him a millionaire, visiting an AI psychologist to try and cope with the trauma that same mission caused. It provides the reading with an urgency: we get to discover Gateway and its workings together with Bob, yet from the start there’s a sense of impending success and doom at the same time. The narrative trick also keeps the reading varied: chapters alternate between good old fashioned space exploration in the Rama vein, and good old fashioned Freudian analysis.

Then again, don’t expect an intricate psychological problem: it’s pretty clear early on that Broadhead’s main issue is a lost loved one. Bob is a coward, and he longs for the maternal recognition he never got. His 20% homosexual feelings stem from the fact that the only times his aloof mother touched him was to measure his temperature rectally. I had a hard time figuring out if that part was satire, something Broadhead made up to annoy his psychologist, or if Pohl meant it. I’m verging towards the latter.

The Freudian stuff is dated and a bit goofy at times, yet Gateway remains an engaging read. That is quite an accomplishment actually, as about a third of the book are those therapy sessions. The strange part is I can’t really put my finger on why this book still works. I guess there’s enough of everything: enough mystery, enough character depth, enough space gadgetry, enough inward voyage, enough spaceship claustrophobia, enough dystopian social critique that’s still relevant today – it might not be intricate or complex, but it is all solid.

The same goes for the book’s philosophical foundation – life is a lottery and we are all stuck inside it. It is simple enough, and true for that matter. Pohl doesn’t aim for the moral high ground, pretentious Hegelian synthesis or some hip Taoist revelation. These were the end of the 70ies, and people came down from their high.

It isn’t clear from the onset, but Broadhead turns out to be a severely depressed character – some reviewers complain about him being an unsympathetic whiner, but I feel that’s very much part of his ‘symptoms’, so to say. If you need to ‘love’ your protagonists, this book might not be for you.

Maybe the back cover says it all: “RICH MAN, DEAD MAN”, in a sturdy type font. Gateway is no nonsense, straightforward writing. It is not perfect, and I don’t think I’ll read the sequels, but 313 pages that are over 40 years old and for the better part still fresh and engaging: not a mean feat. You don’t need to be a lover of vintage SF to still enjoy this – if those therapy sessions don’t scare you, that is.