THE FORGOTTEN BEASTS OF ELD – Patricia A. McKillip (1974)

Some authors have managed to break through the wall between genre fiction and the literary establishment. Le Guin springs to mind, and Atwood as well.

Patricia Anne McKillip will never be able to do so with a cover like the one on the left – of the 2017 edition. Beautiful as it may be, you cannot market this like Orsinian Tales, The Handmaid’s Tale, or even Piranesi.

Also the plot is harder to sell to a regular crowd: Sybel is a reclusive female wizard, surrounded by mythical beasts that are centuries old – a talking pig, a dragon, a lion, a big falcon, a black swan. Hardly experienced with emotions, Sybel is asked to raise a baby, the alleged son of some king. Gradually she becomes “entangled in the human world of love, war and revenge.”

On top of that, I’ve seen this categorized as YA – even by McKillip herself – and while a 14-year-old might enjoy this, a teenager will miss what this book is actually about – just like most people will miss the thing entirely if they can’t get past that cover and the blurb.

So can we fault people for thinking: fantasy from the 70ies for teenagers, nothing to see here, walk on, next shelf? You could say the same of A Wizard of Earthsea, but somehow Le Guin managed to get respect and four Library Of America volumes. It would be interesting to read an academic study of how that came about, but my guess is being the daughter of an anthropologist helped, as did writing about socialism, Vietnam, gender and the likes – Serious Things. McKillip, on the other hand, as far as I can tell, doesn’t seem to write about politics in her later work. She also kept on writing YA titles, not exclusively so, but maybe too many to make a blip on the radar of Literary respect.

Not that I want to make the issue a contest. It is just interesting to ponder the reception of speculative fiction, and what factors contribute to mainstream success: how would Earthsea be looked upon today without Le Guin’s later work?

Because just as Earthsea, The Forgotten Beasts of Eld is about human emotions first. Pat Cadigan tries to frame the story as one about power in her introduction to the Masterworks edition I read, but that reduction doesn’t do the story justice.

So, what is this very first winner of the World Fantasy Award about? I’ll keep it spoiler free: I want nobody deterred from reading the rest of review, because The Forgotten Beasts of Eld is a masterwork indeed.

END_OF_DOCUMENT_TOKEN_TO_BE_REPLACED

What a fantastic book this is. Or rather 6 books. David Mitchell’s sixth novel is a tour de force. Mitchell is no small name: Cloud Atlas gathered widespread praise and attention – and also in The Bone Clocks he serves a grand narrative via 6 connected stories across 6 points in time – from 1984 to 2043, seasoned with a few shorter asides going back to earlier centuries. And similarly, The Bone Clocks is genre defying in a manner that’s pretty singular: the bulk of the book being straight forward literary fiction, but nonetheless with a backbone that’s firmly supernatural fantasy, and a final part that is straightforward, hard hitting dystopian near-future science fiction. This should appeal to nearly any type of reader, and I think it’s a masterpiece – not a term I whip out lightly.

I will return to the significance and impact of the final 6th in the second half of this review, and that part might be of interest for those of you who’ve read this book 3 or 4 years ago. It might be time to reconsider a few things. But first let me get a few other, more general remarks out of the way.

I haven’t read Cloud Atlas, or any of his other books, so I can’t comment on whether this title is better or not – and part of the answer to that question will be taste – but I can’t shake the feeling this is Mitchell’s magnus opus – for now. Written in a seemingly effortless and tasty prose, filled with real characters, genuine emotions, strong & urgent themes relevant to us all – this isn’t only escapist reading. Add to that a broad, kaleidoscopic feel, and an intricately constructed plot that’s obviously visible to a degree, yet so confident that you do not mind seeing the construction – as one does not mind seeing the brushstrokes when examining a Rembrandt or a Van Gogh up close, on the contrary even: seeing the actual brushstrokes and how they work in the composition is part of the joy.

END_OF_DOCUMENT_TOKEN_TO_BE_REPLACED

The Physiognomy is the first book of The Well-Built City trilogy, and all three books supposedly make up one big novel. I won’t be reading book two and three, as The Physiognomy failed to connect with me. I am not saying this is a bad book, I am just saying it wasn’t my cup of tea. As it won the World Fantasy Award – not an award with a bad track record, with winners as diverse as Clarke, Le Guin, Miéville, Kay, Priest, Powers, Wolfe – I’m sure there’s an audience for it.

I’ve devised a quick litmus test to see if you’re part of that audience. Consider these two sentences:

I stared at some of the titles on the shelves and before long found four of my twenty or more published treatises. I was sure he hadn’t read Miscreants and Morons – A Philosophical Solution, since he had not yet committed suicide.

END_OF_DOCUMENT_TOKEN_TO_BE_REPLACED

A few months ago I wrote a couple of paragraphs on the splendidly fresh The Bone Swans Of Amandale, a 28.000 word novella by C.S.E. Cooney. I ended that review with the promise to pick up the entire collection, and I’ve done just that.

Bone Swans features 5 stories – most about 40 pages. All of the stories can by read for free online (check the links below), but I think it merits a physical purchase, very much so. Unique, bold authors as Claire Cooney need all the support they can get. It will also be a great collection to read to your 12 year old kids – and bedtime reading from a tablet simply doesn’t have the same charm. Not to mention screen light being bad for your loved ones’ sleep cycles.

Everything I wrote about The Bone Swans of Amandale is true for the other 4 stories: “poetic, humorous, original, daring, gruesome, outrageous, unsettling and even amoral.” Maybe that last adjective doesn’t go for every tale, but still: that’s quite a row of lauding words. I cannot praise the collection enough. I’m fairly sure it will end up in my favorite ten reads this year…

Below a few notes on each story. Whatever you do after the jump, please, do read those four, short quotes. END_OF_DOCUMENT_TOKEN_TO_BE_REPLACED

Tagged 2010s, Bone Swans, C.S.E. Cooney, Fantasy, How The Milkmaid Struck A Bargain With The Crooked One, Life On The Sun, Martyr's Gem, Review, short fiction, The Big Bah-Ha, The Bone Swans Of Amandale, WFA winner 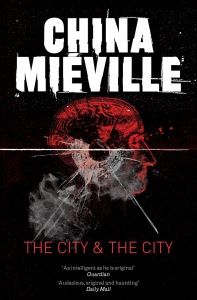 I enjoyed The City & The City a lot. It was only the second book I’ve read by China Miéville. My first was Embassytown, and while that was fun, it was very flawed too. So, my expectations for Miéville’s most hyped book weren’t exactly high, and to make things worse, reading the comparisons to Kafka on the back put my inner-cynic on high alert. Still, it won 6 awards, and its premise really piqued my interest.

First things first, this is not really ‘fantasy’ fantasy. And for sure it’s not science fiction either. Some label this book as near-future, but it is most definitely not. The City & The City is simply speculative fiction. The novel is set in the timeframe of its publication: the very beginning of the 21st century, on our very own planet Earth, in a fictional Eastern European city that is a kind of double city. Two cities exist in and on the space of one, interweaving, but separate – Iron Curtain kind of separate. This is not to be taken as something magical, metaphysical, hallucinatory or fantastical. Both Besźel and Ul Quma are very, very real. While there is a sense of wonder for the reader, discovering both cities’ interwoven workings, it is all perfectly possible & explainable. It’s not New Weird fiction either – a genre tagged to some of Miéville’s other novels. There’s actually nothing impossibly weird about this double city, other than that it doesn’t exist in our reality. It could exist though, and that fact is one of the strengths of the book.

Something else it is not, is Kafka (*). It starts Kafkaesque though, and Miéville explicitly acknowledges Franz Kafka’s influence in the preface. But, as the novel progresses, it becomes clear that the political, bureaucratic stuff is more part of the setting, rather than one of the themes. Another crucial difference with Kafka is that The City & The City isn’t an existential book. END_OF_DOCUMENT_TOKEN_TO_BE_REPLACED 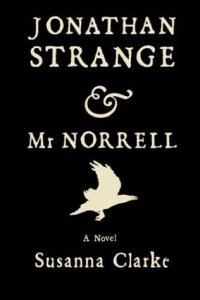 In the first half especially, this massive tome reads more like a collection of anecdotes, short stories and miniatures about magic, folklore and society, which are nearly all interesting, well-crafted, oddly poetic and at times charmingly witty.

The actual story only takes off after about 400 pages (in my pocket edition of 1000 pages). It took me quite some time to reach that mark. I considered giving up around page 300, since not that much was happening, but kept on reading because Clarke’s language and descriptions have an eerie yet funny character that retained a sense of promise about the story itself. 100 pages later, I was fully gripped.

The inventive use of footnotes and the freshness of the enthusiastic narrative voice add to the pleasure this novel provides. The entire book, which has been rightly dubbed a comedy of manners too, has a reflective, ironical vibe, and as such it is very, very English – for lack of a better word.

Lots has been written about this acclaimed book, and I don’t have much to add. Let me suffice with saying that it is utterly original, and a genuine feast of the imagination.

This comes with the highest possible recommendation – if you are willing to invest the time.

UPDATE: Here’s a link to my review of the lesser known The Ladies Of Grace Adieu, Clarke’s 2006 collection of short stories, most of which are set in the same faerie England. And here to a bit of a philosophical analysis of Piranesi, her 2020 triumph.

There’s also a brilliant, in-depth examination of Strange & Norrell on the Strange Horizons’ site – really stunning scholarschip by Elizabeth Hoiem. Very much worth your time if you’re familiar with the novel.

originally written on  the 13th of September, 2015