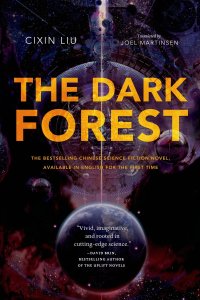 “The depth and expanse of deep space exhibited an arrogance that left no support for the mind or the eyes.“

This novel is an entirely different beast than its predecessor. I liked The Three-Body Problem a lot, and looked forward to reading this sequel. I can’t say I liked it as much. Don’t get me wrong: there’s lots of good stuff in these pages, but as a whole it didn’t live up to the expectations I had.

I think there are two main reasons for my disappointment. The most important one is probably that I didn’t buy the actions and emotions of an important character: humanity itself. (Liu uses lots of exposition to tell the story, and the way he does that results in humanity as a whole becoming a character. This is reinforced by having the individual characters have lots of meetings and conferences with the United Nations and similar organizations that speak for the human race as a whole.) In a way, the premise of this book is similar to Seveneves: it looks like civilization is going to be destroyed in the future, and humanity has to devise plans to deal with this inevitability. In Seveneves a cataclysm will happen in a couple of years, in The Dark Forest the apocalypse is 4 centuries away. There has been some discussion on the fact that things happen more or less orderly in Seveneves: the response of the international community to the threat is quite rational for the most part, and things get done neatly. Wether such a smooth, regulated reaction is likely or even plausible is indeed debatable. The same can be said about how Earth responds to the Trisolarian crisis in The Dark Forest, with the difference that in this book the reactions are often irrational and not orderly. A certain degree of erratic, emotional behavior is to be expected when aliens are going to invade, but I’m not sure if I buy the particular stuff Liu envisions. END_OF_DOCUMENT_TOKEN_TO_BE_REPLACED