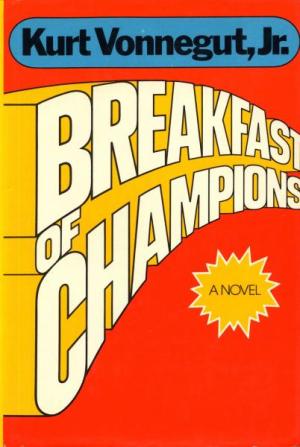 Breakfast of Champions, or Goodbye Blue Monday is a pivotal book in Vonnegut’s career as an author. It’s his 7th novel, and the one published after his masterwork Slaughterhouse-Five. Published when he was 53, it took him years to write, with a lengthy pause due to chronic depression. In a way, it is his farewell to fiction, intending to abandon the fictional form and the novel as ways to change the world or get to the truth. He returned to novels quickly however, publishing seven more.

I think the book was difficult to write because Slaughterhouse-Five was so good, and Vonnegut knew it would be hard to top. Despite the long gestation period, he wasn’t happy with the result and “gave it a C grade on a report card of his published work.” The critics were critical too, yet it remains one of his best known works – maybe in the wake of SH5‘s success?

Every artist has to deal with repetition, and Vonnegut tried to tackle it in this book by trying out two new things, but it are not much more than formal attempts, hardly changing the tone and the voice of his writing. The result is that Breakfast of Champions never rises above being generic Vonnegut. A quick dissection after the jump.