This post is a collection of 3 shorter reviews of 3 very different books. For starters a new, lush Taschen collection of all known Rembrandt’s painted, etched & drawn self-portraits, in which I also offer a quick guide one what Rembrandt book you need to buy. Then there’s a recent, rare non-fiction book on jellyfish, and also here I’ll offer some pointers to other jellyfish books. To end, a short, but incomplete appraisal of Black Swan Green, David Mitchell’s semi-autobiographical account of his year as a 13-year-old, stammering teenager.

END_OF_DOCUMENT_TOKEN_TO_BE_REPLACED

2 short reviews for now. I will post a longer one on The Ethnic Phenomenon soon, which again won’t be a review of a speculative work of fiction. However, I’m pleased to report I’ve finally started rereading Dune a few days ago – so I hope to review that in a few weeks.

If you’re not interested in the books, do check out my Werner Herzog documentary recommendations at the end, and the tragic lesson at the end of the Rembrandt review.

The back cover promises this account of how Jan Six discovered a new portrait by Rembrandt to be a “thriller”: sadly this is not the case. Six’s writing is dull and bland, and there is simply no tension whatsoever present, except at the very beginning, when Six spots the painting at Christie’s – it’s ironic that exactly that turns out to be a false account, but more on that later.

If you’ve read anything about Rembrandt by Ernst Van de Wetering – the leading Rembrandt expert – there won’t be that much to learn from this book about the practice of how 17th century paintings are ascribed to a painter, or on Rembrandt’s painterly processes. If you’re new to reading Rembrandt scholarship, this is an easy and quick crash course though. So, your milage may vary.

END_OF_DOCUMENT_TOKEN_TO_BE_REPLACED

After I finished the fantastic Version Control, I read the excellent Keith Rowe biography by Brian Olewnick. I might still review that, but it’s a hard review to write for an audience unfamiliar with Rowe’s particular branch of experimental music.

Sadly, after those 2 great books, I’ve hit three I did not even finish. That and the relentless summer heat didn’t really urge me to start writing the reviews. Fortunately, that streak of bad reading luck came to an end, as I’ve also read a great, recent SF novella by Peter Watts, and finished yet another book on Rembrandt.

As the summer drought is still not over, I’ve decided I simply won’t bother trying to write longer, in-depth reviews for these books. I won’t even try to write up Hard To Be A God, the 1964 political allegory by the Strugatsky brothers, and the first book in that row of DNFs. I stopped after only 40 pages, not enough to write something meaningful, except that it was all too obviously allegorical for my tastes. Anyhow, without further ado, here’s those 4 mini-reviews…

END_OF_DOCUMENT_TOKEN_TO_BE_REPLACED

A couple of months ago I moved the bulk of my art book collection to another room. I decided to keep a small part, favorites, on my regular shelves. I’ve written a bit on each of those 20 titles below – 20 being just a coincidence by the way.

It is very much intended as a book list, not a list of favorite artists, as that would include a lot more names. The titles are mainly from established contemporary artists, with just three older painters – three big ones, yes.

Click on the covers to be taken to the publisher’s website or some other resource – with more extensive text on the book and the artist.

I’ve included images of artworks too: click those to enlarge.

Here’s an index of all my other art book reviews, most of which are not included in this list.

In 2012, my visit to dOCUMENTA (13) would have been a bit of a disappointment if it weren’t for two artists. One of those is Kader Attia. His installation The Repair From Occident to Extra-Occidental Cultures was jaw dropping, the highlight being slides showing repaired African statues and the likes next to the mended faces of mutilated soldiers from the First World War. The book has all slides, and more. A beautiful edition, full of the uncanny.

END_OF_DOCUMENT_TOKEN_TO_BE_REPLACED 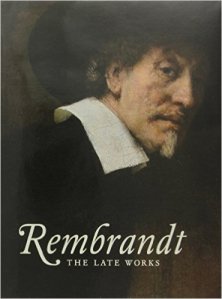 As I’m a bit bogged down in the 700 pages of Erikson’s epic Gardens Of The Moon, I’ve decided to do a review of an art book I’ve just finished. I will finish that first book of The Malazan series, I like it a lot, but it’s just such a slow, massive read, and on top of that it has been a busy few weeks too. So here’s some thoughts on Rembrandt! There’s more pictures after the jump!

I had the pleasure of coming of age in a group of friends heavily interested in contemporary art – 2 of them painters themselves – and so I’ve spent quite some time of my early twenties in art museums and galleries. I still do, but to a much, much lesser extent. During those years, I’ve come to realize that the history of art has a lot to offer too, and that art doesn’t need to be new and shiny to be of interest. I kinda already knew that, as I cried seeing Botticelli’s fifteenth century masterpiece Allegory of Spring in the Uffizi in Florence when I was 17. But it was only in 2007, when I saw a documentary on contemporary Belgian painter Sam Dillemans, that I gained the right mental tools to really look at “old” art. Dillemans is a huge Van Gogh fan, and he uses Van Gogh to explain that it’s not really important what you paint, but how you paint it. That’s obvious maybe, but to my 28-year old self it was revelatory.

Enter me, 35, seeing Rembrandt Van Rijn’s final self-portrait in the Mauritshuis in The Hague, July 2014. That museum has Vermeer’s The Girl With The Pearl Earing too, but the 1669 self-portrait is the true gem of the collection. I was struck by lightning. I had seen paintings by Rembrandt before, but never one of his late works. The way he painted his hair, topped with a kind of turban or ribbon, is simply stunning. In a way, what I saw was the birth of impressionist and even expressionist painting, already in the 17th century. It took me half an hour before I could continue to the next painting, and before leaving the museum, I returned to it again. A profound delight. 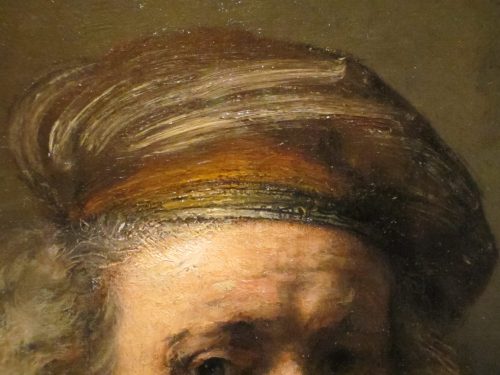 So when The National Gallery in London and the Rijksmuseum in Amsterdam put on an historic, first time exhibition devoted to Rembrandt’s later works, I was thrilled. The London show ran from October 2014 to January 2015, and travelled to Amsterdam afterwards, from February to May 2015. I saw the Amsterdam exhibition. It was amazing.

I didn’t buy the exhibition’s catalogue afterwards, but the taught of it kept nagging, and a few weeks ago I did order it. Jonathan Bikker & Gregor J.M. Weber have done an excellent job in putting together a clear yet detailed book on Rembrandt’s later works. The book includes contributions of the editors, and Majoerie E. Wieseman, Erik Hinterding, Marijn Schapelhouman and Anna Krekeler. It has 325 pages and tons of illustrations.