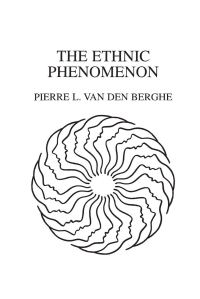 This is a tricky book to review, as it has such a thorny subject: race and ethnicity. It’s also a fairly old text, first published in 1981. Social sciences certainly gained more data since, yet dismissing this book as outdated would be a huge fallacy.

On top of its subject & age, Pierre L. Van den Berghe takes a sociobiological approach – possibly prompting fears of social Darwinism and the likes. That fear is unwarranted, as The Ethnic Phenomenon is a clear and loud refutation of any attempt at instigating hierarchies or other forms of power based on race and ethnicity.

To make it even more messy, Van den Berghe admittedly writes in a Marxist tradition, but not without offering critique on orthodox Marxism. More importantly – this needs to be stressed – Marxist thought is not the core of this book at all, and is hardly used to support his main arguments – if at all.

Still, The Ethnic Phenomenon is – given the nature of the overall subject – clearly a political book too, and it could not have been otherwise. It speaks for Van den Berghe that he is upfront about his ideological framework. His arguments & reasoning is always clearly spelled out to the reader, who can judge the merit of his thinking case by case. It would be outright stupid to dismiss the entire book just because it is writing by a leftist social scientist – I can imagine people of any political leaning agreeing to lots of what he says, as he generally makes a strong, nuanced case.

Just to get it out of the way: Van den Berghe is unambiguous about the fact that ‘race’ as a workable biological category, or a category to use for social attributions, simply does not exist. Nevertheless, there “is no denying the reality of genetic differences in frequencies (not absolutes) of alleles between human groups.” If you get worked up because of facts like that, this book is not for you.

Before I get to the actual discussion of its 301 pages, let me first say this: The Ethnic Phenomenon is a truly first-rate piece of scholarship, setting the paradigm for the thinking about this topic. It is thorough, honest and courageous, attempting to bring some clarity in a highly emotional debate. This is not an ethics treatise, but a scientific study, including 24 pages of bibliography and a 10-page index.

At the same time, the book wants “to exorcise ethnicity by trying to understand it”. This is an important book, a landmark, absolutely mandatory for everybody that seriously studies the history and the contemporary effects of colonialism, racism, nationalism and ethnicity.

First I’ll try to give the gist of Van den Berghe’s thinking. Afterwards I’ll zoom in on some tidbits I found interesting, and I’ll end with a few critical notes.