WHAT IS REAL? THE UNFINISHED QUEST FOR THE MEANING OF QUANTUM PHYSICS – Adam Becker (2018) 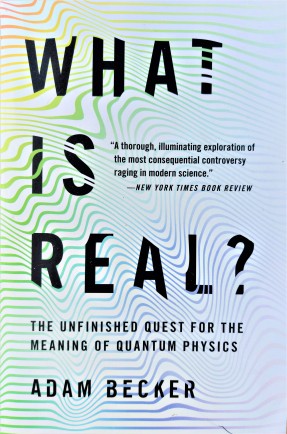 Let me start with the blurb to give you some context:

“The untold story of the heretical thinkers who dared to question the nature of our quantum universe
Every physicist agrees quantum mechanics is among humanity’s finest scientific achievements. But ask what it means, and the result will be a brawl. For a century, most physicists have followed Niels Bohr’s Copenhagen interpretation and dismissed questions about the reality underlying quantum physics as meaningless. A mishmash of solipsism and poor reasoning, Copenhagen endured, as Bohr’s students vigorously protected his legacy, and the physics community favored practical experiments over philosophical arguments. As a result, questioning the status quo long meant professional ruin. And yet, from the 1920s to today, physicists like John Bell, David Bohm, and Hugh Everett persisted in seeking the true meaning of quantum mechanics. What Is Real? is the gripping story of this battle of ideas and of the courageous scientists who dared to stand up for truth.”

While What is Real? The Unfinished Quest for the Meaning of Quantum Physics is marketed as a popular science book, it should be mandatory reading for professional physicists, as it is a critical history of their field first and foremost, trying to explain why a problematic theory like the Copenhagen interpretation of quantum mechanics has endured for so long.

It works both as a solid overview of the science and possible interpretations of quantum theory, and as a sociological history of the workings of the field – both from a European and American perspective. There is much to learn here: about quantum science, about science as a practice, and about philosophy of science as well. END_OF_DOCUMENT_TOKEN_TO_BE_REPLACED 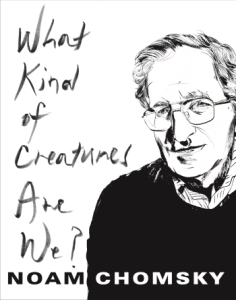 I’m always puzzled when I read statements like Howard Gardner’s “Noam Chomsky is arguably the most influential thinker of our time”, or the Observer’s “[Chomsky is t]he world’s greatest public intellectual”. He may indeed be the “most prominent critic of imperialism”, as the Guardian put it. But if you look at the real world effect Chomsky has, his influence seems meager and pathetic: the Western world is still heavily involved in warfare in the Middle East, and the inequality gap has been widening since the 1980s, and still very much is – both within the Western world, as globally.

Chomsky’s powerful critique of the current crises our world faces is even published by a mainstream company as Penguin Books (like the excellent 2013 Power Systems, or 2011’s Making The Future), yet not a lot seems to change for the better.

There’s a very big rift between what some intellectuals and activists think and read, and their ability to influence policy. The existence of a ‘real’ democracy worthy of that name is an illusion, as The New York Times recently reported – a fact that Chomsky also points out in What Kind of Creatures Are We?, using different data from a different study. Nicholas Kristof wrote the following on January 22nd, 2016:

Martin Gilens of Princeton University and Benjamin I. Page of Northwestern University found that in policy-making, views of ordinary citizens essentially don’t matter. They examined 1,779 policy issues and found that attitudes of wealthy people and of business groups mattered a great deal to the final outcome — but that preferences of average citizens were almost irrelevant.  (www.nytimes.com/2016/01/21/…)

What Kind of Creatures Are We? is marketed by Columbia University Press as a kind of summary of Chomsky’s work, spanning over half a century. Chomsky first gained worldwide respect as a linguist, publishing groundbreaking work on the innateness of language and universal grammar, but has been a scholar and a vocal critic of imperialism and capitalism from the onset too. I know of no other thinker with such a broad and erudite knowledge.

This book is divided in 4 parts: What is language?, What can we understand?, What is the common good? and The mysteries of nature: How deeply hidden? It has 127 pages of actual text, and – indicative of Chomsky’s wide-ranging research – 15 pages of reference notes, plus an index of 20 pages. Although the third part deals with politics – there is little new to be found here for the reader familiar with the political Chomsky, with a slight emphasis on John Dewey this time – the book is mainly an epistemological work, tracing its origins to the advent of modern science. Newton, Hume and Locke are featured a lot. Really, a lot. There are 39 references to Newton in the index. That’s roughly one mention on every third page.

I found the first 3 parts very interesting, and at times even thought-provoking. I don’t claim to have understood everything, let alone to be able to formulate critique on what Chomsky wrote. It is not light, easy reading, although I must say most is indeed written in “clear, precise and nontechnical language”, as promised on the dust jacket. The latter half of part 4 was a bit too much for me, as I had reached my saturation point, and things became a bit too dense.  END_OF_DOCUMENT_TOKEN_TO_BE_REPLACED