C.S.E. Cooney’s collection Bone Clocks was fantastic – one of my favorite fantasy reads ever. It won a World Fantasy Award, and the titular novella The Bone Swans Of Amandale was nominated for a Nebula. So I was pleased to see Desdemona And The Deep published by Tor: her first longer form publication. I wrote ‘longer form’, and not ‘long form’, as generally I’ve seen Desdemona And The Deep referred to as a ‘novella’ – I guess it says something about the inflation of the fantasy market that a 220-page story can’t just be called a novel.

Anyhow, it’s the third book in the Dark Breakers series. The previous installments The Breaker Queen and The Two Paupers – both about 88 pages – were only published in magazines and as Kindle editions by Fairchild Books, and there’s talk of Tor reissuing them. The stories are set in the same world, but each can be read as stand alone.

That world is a world in three parts: Athe (more or less like regular Earth in a 1920ish setting), Valwode, a magic country in between where Gentry lives, and beneath that, Bana The Bonekingdom, where goblins dwell.

As for the story, this is what the back cover promises: the spoiled daughter of a rich mining family must retrieve the tithe of men her father promised to the world below. On the surface, her world is rife with industrial pollution that ruins the health of poor factory workers while the idle rich indulge themselves in unheard-of luxury. Below are goblins, mysterious kingdoms, and an entirely different hierarchy.

As you instantly see, it ticks a couple of 2019’s boxes: pollution, social justice, inequality. It’s not overtly on the cover, but you can add an explicit transgender story line to that list. I have to say Bone Swans was much more amoral, much less grounded in today’s political debates.

END_OF_DOCUMENT_TOKEN_TO_BE_REPLACED 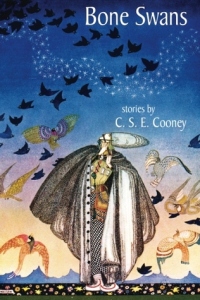 A few months ago I wrote a couple of paragraphs on the splendidly fresh The Bone Swans Of Amandale, a 28.000 word novella by C.S.E. Cooney. I ended that review with the promise to pick up the entire collection, and I’ve done just that.

Bone Swans features 5 stories – most about 40 pages. All of the stories can by read for free online (check the links below), but I think it merits a physical purchase, very much so. Unique, bold authors as Claire Cooney need all the support they can get. It will also be a great collection to read to your 12 year old kids – and bedtime reading from a tablet simply doesn’t have the same charm. Not to mention screen light being bad for your loved ones’ sleep cycles.

Everything I wrote about The Bone Swans of Amandale is true for the other 4 stories: “poetic, humorous, original, daring, gruesome, outrageous, unsettling and even amoral.” Maybe that last adjective doesn’t go for every tale, but still: that’s quite a row of lauding words. I cannot praise the collection enough. I’m fairly sure it will end up in my favorite ten reads this year…

Below a few notes on each story. Whatever you do after the jump, please, do read those four, short quotes. END_OF_DOCUMENT_TOKEN_TO_BE_REPLACED

Tagged 2010s, Bone Swans, C.S.E. Cooney, Fantasy, How The Milkmaid Struck A Bargain With The Crooked One, Life On The Sun, Martyr's Gem, Review, short fiction, The Big Bah-Ha, The Bone Swans Of Amandale, WFA winner 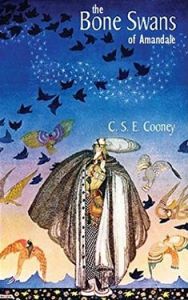 I had never heard of C.S.E. Cooney before I came across her name in the list of this year’s Nebula nominees. Cooney has only published her first collection of short fiction – Bone Swans – last year, and hasn’t published a full length debut (yet). The title of the Nebula nominated novella, The Bone Swans of Amandale, instantly struck a chord. Something about it stuck out. I was intrigued. If an author can come up with such a good title, there might be a pot of gold to discover. Googlegooglegloogle, and to my instant gratification I found the novella in full on the website of Cooney’s publisher (the link is here). I printed its 28.321 words (about 60 pages in a book) and started reading.

It’s fitting that Gene Wolfe wrote the introduction to the Bone Swans collection. Cooney’s novella has something of the mythic folk blend some of Wolfe’s own work has – like the stories Severian tells in the mind-boggling The Book of The New Sun, and the second story of The Fifth Head of Cerberus.

The Bone Swans of Amandale is a retelling of the legend of the Pied Piper of Hamelin, combined with a lesser known fairy tale written down by the Grimms, the pretty gruesome and bleak The Juniper Tree, and a dash of shape shifting Fairy Folk, Swan Lake and the likes. It reminded me at times of the footnotes and stories in Susanna Clarke’s brilliant slow burner Jonathan Strange & Mr. Norrell too. This is not an update of the Pied Piper or The Juniper Tree in a more contemporary setting, nor a simple mix of the two. This novella is very much its own thing, inventing a whole new story, in a whole new setting, with a whole new vibe.