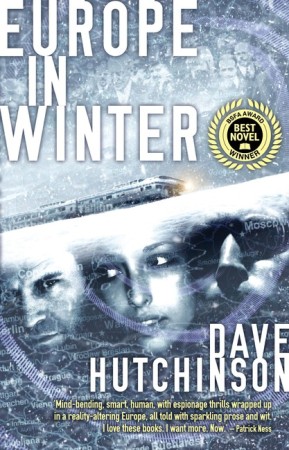 I read Europe in Autumn in 2016, and Europe at Midnight in 2017. I enjoyed them both a lot – Autumn was even one of my favorite reads that year, back when I read a book each week. But for some reason Europe in Winter has been lying on my TBR for nearly 5 years. I really can’t tell you why: I simply was drawn more to other books each time I needed to pick a new read.

The appeal of a review like this is limited: the third book in a series that was much praised, but that seems to have been a bit forgotten as well – even though this third one won the BSFA. Hutchinson published a final book, Europe at Dawn in 2018, as well as a solid space opera novella in 2017, Acadie.

Either way, if you haven’t read the previous books, by all means, read them – that is, if John le Carré-infused near-future thrillers appeal to you. The good thing is that you can stop after every installment: Hutchinson wrote it one book at a time, so while you do have to have read the previous books to enjoy each new installment, you don’t have to read the next one as Dave never planned a 3 or 4 book series.

That said: I had forgotten all the details of the previous books, and it didn’t hinder my enjoyment of this one. That’s because Hutchinson’s main strength in these books is twofold: the world building and his knack for short stories.

Let me say something surprising about the world building first: I don’t really buy it. I don’t think Europe is under threat, not even with rising populism across the continent, Brexit and a bit of anti-EU sentiment in Hungary and Poland. I don’t see Europe fracturing soon. I didn’t think it last year, and I sure don’t think so since Russian troops crossed the Ukrainian border about a month ago.

Yet it is precisely this aspect – the so-called “parlous state” of Europe that Paul Kincaid talks about in his excellent analysis of the book for the Arthur C. Clarke Shadow Jury – that gets all the attention in most reviews. That is not to say Hutchinson doesn’t tap into a certain real political sentiment. Indeed, the naive glory days of the end of history and the victory of liberal “Western democracy” are over. But that doesn’t mean the European Union is breaking down. It might be hyperbole, but I see the United States collapsing sooner.

Be that as it may, if you approach the Fracture Europe Sequence as “satire, extrapolation, exaggeration, distortion” as Kincaid wrote, it works wonderfully well, and the intricacies of the world Hutchinson envisioned continue to be engaging.

This is related to how Hutchinson build his story: as something fractured too. Basically, these books are a sequence of related short stories, it is precisely this modular form that allows Hutchinson to freely expand and build upon in each sequel – especially since none of the characters posses all the information, and we readers neither.

This form is one of the books’ many strengths, but in Winter it is also its weak spot. Remarkably, Kincaid wrote that “there is no point where [Hutchinson] allows the story to flag”, contrasting this with the previous two books. I don’t agree, as for me it was exactly the opposite. I thought the previous books nowhere became tiresome, and it’s only in Winter that the story did flag a bit: the final fourth failed to really grab me. That’s because Hutchinson expands his world in that final part of the novel yet again, and to a certain extent it felt like he stretched it too much.

So I rather agree with Jeroen, who wrote that the ending “seems to come out of the blue. We never really follow Rudi’s explorations from up close, so there is no sense that the story is going places, and when Hutchinson seemed to tire of his short stories he pasted the resolution at the end to round off the novel.” While the books seem intricately crafted, at the same time I get the impression Hutchinson made it up as he went along – nothing wrong with that, to be clear, it’s an interesting paradox that attests to Hutchinson’s writing prowess & skill.

I also agree with Anna Chapman in the Speculative Herald: “Europe in Winter is an elegant demonstration of its own themes: that life never ties things up neatly; that nobody ever gets to see the whole story; and that in life the story never ends, just branches off into infinity.” Her entire review is worth reading too, and Winter seems to have generated some excellent critical writing – there’s Nick Hubble’s text for Strange Horizons as well.

While the mystery and the action is great fun, I’ve slowly come to realize the big story arc doesn’t really interest me. I think that’s because it doesn’t seem to be the main focus, and you know you’ll have to wait for the reveal at the end either way. It makes that part of the reading a bit of a passive experience – the talk of mental puzzles in some other reviews notwithstanding.

Rather than add to the debates, I’ll leave it at that – I don’t have that much else insightful to contribute, not even after the world has been truly hit by a virus: the thing that caused Europe to crack in Hutchinson’s fictional version. Certain parts also reminded me of Christopher Priest and his branch of English science fiction, but I’ll leave it to somebody else to examine that comparison.

Final verdict: the first two books are excellent – must reads I’d say. All things considered, Winter is good as well, much better than most books, but I don’t think I’ll order Europe at Dawn. I’m sure it will be a solid read too, but there’s so much else to read, and I’m afraid it will just be more of the same. But if Hutchinson publishes a new novel, I’ll buy it blindly.