An Infinite Summer‘s first cover, pictured here, is kind of fitting to this short story collection. The other covers, at the end of this review, don’t really do it justice. Christopher Priest has a sophistication to his writing that’s more akin to regular literature than scifi of the pulpy kind.

My first encounter with Priest was Christopher Nolan’s 2006 movie adaptation of The Prestige. I also read 1974’s Inverted World, but that was at the onset of my explorations of SF, and while I liked the novel, I expected the wrong things of it, and I ended up writing a short review that was ultimately negative because of an ending that was ludicrous from a realistic point of view. In other words: I applied Hard SF standards to a novel that was at heart more poetic than scientific.

I’ve always felt that I should give Priest another chance, and when I found An Infinite Summer a few weeks ago in a second hand store, I knew it was going to be my next read. 2011’s The Islanders has been on my TBR for a few months too, but I thought this collection would be a better introduction to the world of the Dream Archipelago – because it was published way earlier, and because I liked the idea of short stories as an introduction to what seems like a fragmented concept to begin with.

Not that all of the 5 stories/novellas in this book are considered Dream Archipelago material: Whores, The Negation and The Watched are – and they are also collected in the 1999 The Dream Archipelago collection. Palely Loitering isn’t a DA story, and while the title story An Infinite Summer is considered to be one by some, it doesn’t mention the DA in the story itself, it’s not part of the later collection, and Priest himself doesn’t frame it as such in the introduction to this volume either – while he explicitly does so for the three I mentioned.

Both “Whores” and “The Watched” are from a loosely linked cycle of stories I think of as “the Dream Archipelago” (“The Negation” also fits into the series, although in a slightly different way.) The Dream Archipelago is more an idea than an actual place, but if it has a correlative reality then it would be a kind of fusion of the Channel Islands and Greece, with bits of Harrow-on-the-Hill and St Tropez thrown in for good measure. (…) There is very little in common between each one, except perhaps the words “Dream Archipelago” themselves.

I’ll first give a few general remarks about the collection, and afterwards zoom in and say a few words on each story.

An Infinite Summer has a few returning themes that tie it into a whole, as Priest himself explains in the introduction.

Although these stories have all enjoyed previous publication, I think of this book as a whole, and as a whole new work. I have revised all the stories here, and placed them in a deliberate order, with a purpose that I hope will become clear on reading. The proper context for these stories is as you find them here, sitting quietly by themselves in a docile row.

The interpretation of “a purpose” isn’t fully clear to me. If Priest meant that there is one overall purpose to the order of these stories, I haven’t discovered that. But if he meant the ordering was done in a purposeful manner, I do think he succeeded in creating a “new work” indeed, and there is a rhythm and interconnectedness to these stories that works well, so that they reinforce each other, and climax at the end.

Love, time travel, nerve agents and war are superficial similarities to some or even all of these stories, but the connections run much deeper: they deal with observing others and oneself, memories & images of each other, and how people change over time – because of observations & because of context. It must also be stressed these stories are human first, all else secondary: the war is just a setting, the sparse science fictional ideas mainly just a backdrop too.

An Infinite Summer (1976, 24 pp.) – A haunting tale, both emotional and creepy, with a few great scenes. Priest’s prose is solid – a slow, careful writer indeed. It manages to convey the isolation of the main character quite well. The one point of critique I have will only make sense to those that have read the story, but I’ll state it anyhow, without spoilers: the worldbuilding wasn’t fully convincing, because Priest made it seem like the Freezers and their tablaux were everywhere, and so their actions would go noticed in the real world – just too many disappearances to explain. But I will not make the same mistake again, and hold Priest to a standard he doesn’t want to achieve: this is no Hard SF, it aims for “romantic truth” instead.

Whores (1978, 15 pp.) – Short, brutal. Maybe not fully PC anymore for these times, in its depiction of sex work – both in a realistic and highly surreal way. The very human themes of pity, desire and shame for one’s desire will return in the final story of the collection.

Palely Loitering (1978, 54 pp.) – I truly don’t understand time travel stories that have a paradox. Over the years, I’ve come to accept them as a genre, with authors deliberately embracing illogic paradoxes, but I think this story would have been better without it, and it could have been easily edited without hurting the overall message: the start of our protagonist’s obsession could have been easily written as a coincidence. I agree with a few reviewers that the particular time travel mechanic could have been used to a greater effect – but than again: not what the story is about. Priest managed to write a wonderful story about overcoming youthful trepidation. The way he evokes childhood expectations at the beginning of the story makes it moving too. It won the BSFA for Best Short Fiction.

The Negation (1978, 47 pp.) – For Joachim Boaz this is the highlight of the collection, but for my tastes it is a bit too meta. I generally don’t like literature about literature, probably because of my background in literary science, and my distaste for navel-gazing. Not that this story should be reduced to its meta-aspects. It also channels the spirit of Kafka, with distant “burghers” ruling, and a war that nobody can explain and a wall of which nobody knows who build it. The Negation is the most critical story of the collection, with a sharp rebuke of the ruling class that profits from war. It also shares the theme of teenage infatuation with Palely Loitering.

The Watched (1978, 63 pp.) – Worth the price of admission, as they say. This story ties lots of themes from the previous ones together – guilt, curiosity, erotic obsession, deceit, the suspension of past & future, people watching people, one-sided relationships. It’s of note that this story’s SF content is worked out the most of the entire collection, and it’s masterful how much Priest manages to set up the rails in just the first 5 pages. Having a theory of mind is crucial for human development: knowing what the other knows. That concept is used in multiple ways to make this story work, and The Watched achieves a psychological realism rarely seen – even though the ending looks like a surreal fever dream. Priest really sucked me in with this one. Brilliant writing – nominated for both a Hugo & a Locus.

While I wouldn’t say this collection is among the best I’ve read, it is convincing, and none of the stories are less than good. The Watched particularly is a 5-star affair. Christopher Priest knows his craft.

I’m very much looking forward to reading The Islanders. 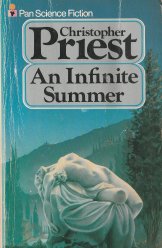 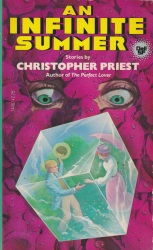