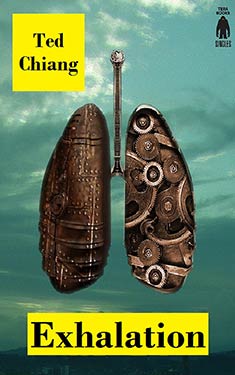 I was conflicted about Stories of Your Life and Others, Ted Chiang’s much lauded first collection. There’s something about this guy: he can write – but are these really, truly stories?

So at first I decided to skip Exhalation: Stories, his second collection, published in 2019. But then I read a glowing review on Speculiction that dubbed the title story “one of the greatest science fiction stories ever written”. It also won three major awards: the Hugo, Locus and BSFA. As it is available for free on Lightspeed Magazine’s site, I decided to read just that.

It turned out to be a typical Chiang story: exquisitely crafted, good prose, convincing atmosphere, smart ideas. But sadly, for my taste, it’s also a bit too didactic, for two reasons.

It tries to convey a message – the clichéd ‘be thankful for the wonder of existence’, but more importantly, because it follows the typical Chiang template: he read some interesting stuff, and tries to mold his newfound wisdom into a story.

This time the main focus is on neuroscience, and the debate on the classic boxological Theory Of Mind: do our brains have representations of their content inside their brains, or not? The Nobel Prize winning research by Kandel and O’Keefe & the Mosers on rats has proven the classic T.o.M. wrong, and Chiang has managed to translate that into a kind of steampunk-ish robot setting. At least, that’s my guess, as I haven’t read any author notes. I know Chiang included those in this first collection, but I’m not sure if they exist for this particular story. (If they do exist, and somebody could prove or disprove my hypothesis in the comments, that would be great.)

The other focus is a classic cosmology conundrum: is our universe finite, and will it get to a final (dead) state of equilibrium? He cleverly inserts a bit of speculation about possible multiverses too.

What Chiang does absolutely brilliantly is marry these two ingeniously via a subdued steampunk setting, and as such this is a truly great science fiction story indeed. It is really a tour de force.

What Chiang fails to do, is tell a compelling story about characters. As the story progresses, the clinical, mechanical nature of his modus operandus becomes clear. One could say: it suits this particular story about automatons, and that’s definitely true, but for my tastes Exhalation lacks emotion & something resembling a real character – instead of a mouthpiece for ideas. I even dare to claim that ‘Exhalation’ lacks a real plot, and at times it felt a bit drawn out. As such, it kinda reads as something formulaic, written for a creative writing class – however brilliantly done.

So where does that leave me re: Exhalation: Stories? I might try and source a few of the other recommended stories for free online, but at the moment I’m not buying the collection.