My 2017 posting ratio is about half of what it was last year, as life continues to happen, but the number of readers on Weighing A Pig keeps rising slowly but steadily. A big thank you to everyone who has read, liked, linked or commented. My best wishes for 2018!

I’ve read 29 titles in 2017, and reviewed 26. Below are the ones I gave a 5-star rating on Goodreads, 8 in total, in no particular order. Click on the covers for the review. After the books, music & art.

Europe At Midnight – Dave Hutchinson (2015)
If you like snappy, fast paced near-future spy stories with a twist: don’t pass up on this series. This is number 2, and it’s even a bit better than Europe in Autumn. It’s not really a sequel, but a companion volume. Very English too. A 21st century blend of Jonathan Strange & Mr. Norrell and John Le Carré.

You Should Come With Me Now – M. John Harrison (2017)
Harrison is over 70, but this new short story collection doesn’t read as complacent, old hat fiction. Genre defying short stories and flash fiction about “crumbling characters in crumbling landscapes”. There’s a lot of poetry here, and prose that’s of the highest quality.

Gypsy – Carter Scholz (2015)
A bleak Hard SF novella about a spaceship heading out of our solar system, fleeing an Earth in tatters. Both the content as the format are interesting, and especially fans of KSR should take note, not only because because Scholz and Stan are friends, but because of a certain similarity with Aurora‘s themes too. Duncan Jones’ movie Moon came to mind as well.

A Wizard Of Earthsea – Ursula Le Guin (1968)
If I had to pick one title, I think this would be it: the best read I had in 2017. Not bad for a book often billed as written for children. “Composed sparely, shaped by narratives so basic they must be inscribed upon our cells, they read as if they were not written but found, dug out like jewels from rock.”

Stand On Zanzibar – John Brunner (1968)
Incredibly prophetic social science fiction, presented as a typical postmodern cut-up collage of texts. Set on an overpopulated Earth in 2010.  Even as it’s almost 50 years old, Brunner’s novel remains powerful and relevant, and the best critical book I’ve read this year, outclassing this year’s New York 2140 – a similar book in more than one account – easily.

Bring Up The Bodies – Hilary Mantel  (2012)
I wrote this in my 2016 favorite post: “I should read more non-speculative fiction, as both of the non-speculative titles I read this year made this year-end list.” The same is true this year, and Bring Up The Bodies is the sequel to Wolf Hall, a historical novel set in Tudor England. The final book in the Thomas Cromwell trilogy probably won’t be published before 2019, but I’m pretty sure it will make my year end list then as well.

Beyond Apollo – Barry N. Malzberg (1972)
On the surface it just screams ‘seventies pulp’, yet this is a book that has more depth than most books published today. Even though it is a rather thin story about an insane space captain that’s the only survivor of a mission to Venus, it delivers a lethal blow to all the merry optimism of popular entertainment, in a form that may even be more radical than Stand On Zanzibar. If you enjoy Vonnegut, try this too.

Taxi Naar De Boerhaavestraat –  J.M.H. Berckmans (1995)
A book in Dutch, by an Antwerp writer who passed away almost 10 years ago. His work is sadly overlooked by the bulk of the literary establishment, as Berckmans’ books are too easily classified as outsider art. There’s lot of human wisdom here, and a very lucid command of language, even though these stories often are ramblings indeed.

I’ve only read 4 books published in 2017. I did read countless of reviews on other blogs, but not a lot of titles appealed to my taste. With that limited exposure to recent books in mind, for the moment, my vote for best book released this year goes to You Should Come With Me Now. Aside from Raven Stratagem, Bear’s The Stone In The Skull, Hutchinson’s space opera novella Acadie, and Human Trees by Matthew Revert, there are actually no other 2017 titles on my TBR, and there’s nothing else on my radar – maybe Oathbringer (update: this review convinced me I should not start that). So I guess Harrison’s short story collection will remain #1 for the foreseeable future. It’s not for everybody, but if you like Kafka, Miéville & Wolfe, please, do yourself a favor, pick up a copy.

Aside from Bakker’s The Warrior Prophet, another big disappointment this year was New York 2140, by one of my favorite authors, Kim Stanley Robinson. Not a bad book per se, but too much message for us contemporaries, which made for a rather transparent read.

What’s in store for 2018? Ian McDonald’s third and final book in the Luna trilogy, Moon Rising (July) will hopefully be as good as the first book was, and there’s a new KSR scheduled for release in October that will hopefully be a return to form too – as it will focus on China and moon colonization, I think it will be less message oriented and so I have high hopes. In August Tor will publish a translation of yet another Cixin Liu novel, Ball Lightning. And as I’ve written last year, maybe Patrick Rothfuss might finally finish revising Doors Of Stone? I fear even more I might have evolved too much as a reader to still enjoy Kvothe’s story…

Owning and looking through art books is one thing, reading the texts is something else. This year I’ve finally finished Larry Silver’s giant book on Pieter Bruegel, as well as the text from the book from the Kunsthistorisches Museum in Vienna, edited by Wilfried Seipel. I have a 2016 biography on Bruegel lined up, written by Leen Huet, and Bruegel In Detail by Manfred Sellink. I’m planning to do a Bruegel post on those 4 books when I finish the latter 2.

Even more important for me are the books on Rembrandt I’ve started this year. There’s one by Seymour Slive on his drawings, and I’ve already finished that. Something else is the colossal Rembrandt’s Paintings Revisited – A Complete Survey: A Reprint of A Corpus of Rembrandt Paintings VI, a cheaper edition of the final scientific publication by the Rembrandt Research Project. If you have an interest in Rembrandt, or even painting in general, you cannot go without this book – Rembrandt’s oeuvre borders on the incredible, and seeing it all together, presented chronologically with detailed notes has been my artistic experience of 2017, and that’s saying something, as I’m only 1/4th in! You can get this new edition (published in 2017) for about 70 euros, and that’s a real steal: the original costs over a 1000 euro. ‘Cheaper’ doesn’t mean inferior quality: all prints are outstanding. The author, Ernst van de Wetering, is a giant. I’m reading it in tandem with his 2016 Rembrandt: The Painter Thinking. I’ll do a new Rembrandt post too when I finish them.

I bought even less new music as I did last year, maybe 20 discs tops. There’s one record that stands out for me.

Why not quote The Guardian? “Radigue spent most of her career taming synthesiser feedback into exquisite astral sounds. Her pieces lasted for hours: grand vistas that unfolded with monumental slow grace. Now she’s into her 80s and writing her ultra-slow music for acoustic instruments, working on a roaming series of solo and ensemble pieces called Occam after the theory of philosopher William of Ockham that the simplest option is always the best. There are no scores, only verbal instructions, and nothing can move fast, so Radigue is very particular about which musicians she’ll trust to take her ethos seriously. The three featured on this album are the very best: harpist Rhodri Davies, violist Julia Eckhardt and clarinettist Carol Robinson, all stunningly adept at summoning those ephemeral overtones and partials, all masters of what Radigue calls “the virtuosity of absolute control”.”

Also tons of Louis Armstrong & Billie Holiday, a few big mammoth boxes each, in total compromising the bulk of their most important recorded output.

Icon by Sidi Labri Cherkaoui with GöteborgsOperans Danskompani & Eastman, was great. I saw the show in De Stadsschouwburg, Antwerp, on the 27th of May. There also was a great, great moment in Winterbranch, a 1964 piece by Merce Cunningham, danced by the Ballet de l’Opéra de Lyon in deSingel in Antwerp on the 24th of February. Overall it was a difficult, not really satisfying performance on La Monte Young’s 2 Sounds, but a particular, chilling moment in the staging by Robert Rauschenberg made it maybe the best thing I’ve seen this year.

Documenta 14 was overall boring & often pretentious – at least in Kassel, as we didn’t visit the Athens’ part. Highly political, but preachy, and mostly just surface level activism: as if making art with reindeer skulls about Norway’s policies will save future animals. I’ve visited 4 editions, starting with Documenta 11 in 2002, and with each edition the overall quality has declined: too much message, not enough form. There were two redeeming pieces though, maybe unsurprisingly documentaries, as in that medium an interesting subject often sells itself:

Commensal, a 2017 film by Véréna Paravel and Lucien Castaing-Taylor. It “explores the complicated story of Issei Sagawa, who gained notoriety in 1981 when, as a graduate student in Paris, he murdered a fellow student and engaged in acts of cannibalism” and because of legal issues was set free in Japan, where he became a cult figure and a minor celebrity, even publishing a manga version of his story – true crime horror. Commensal is good because of more than its subject though, as the formal choices that were made brilliantly enhance the strange story. I was creeped out more than a few times, and the suspension of moral judgment made the glimpse in the mind of a deranged fellow human being only more powerful.

Skulptur Projekte 2017 in Munster was boring too, but luckily not preachy. Sad for an exhibition which only takes place every ten years. One installation did make the trip worthwhile: Pierre Huyghe‘s monumental, hightech new-gothic After ALife Ahead. Bees, peacocks, human cancer cells in an incubator, an aquarium, all in a dug out abandoned ice rink, virtual reality, all interdependent. Hard to explain in a few words, so here are a few pictures. It sounds heavy-handed, and it was heavy-handed, but somehow it worked.

Nel Aerts also deserves a mention. Her solo exhibition in De Warande in Turnhout truly was refreshing. While echoes & influences of other artists are clearly visible, they do not detract from the fact that Aerts has found a confident voice & visual language that is her own. Turnhout might be just a quiet provincial Belgian town, luckily she has had expositions in places like Budapest, Paris, Copenhagen, Amsterdam, London, Oslo, New York and Brussels too.

Both Twin Peaks: The Return, Lynch’s 18 hour epic, and the third season from the scifi cartoon show Rick & Morty didn’t disappoint. All else simply pales in comparison. 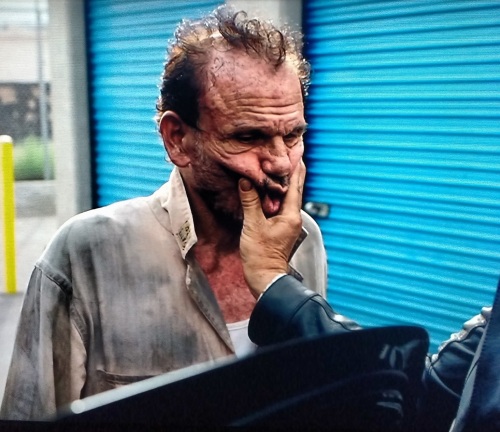