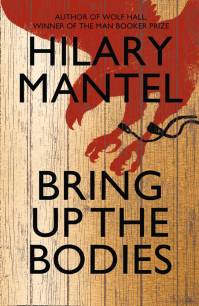 Reviewing a sequel is a bit harder: you can’t spoil too much for readers that haven’t read the previous book, and there’s the danger of just repeating oneself if the books are similar.

None of that in this take on Bring Up The Bodies – the much-lauded sequel to the equally lauded Wolf Hall, Hilary Mantel’s historical novel about the rise of Thomas Cromwell, the troubles surrounding Henry VIII & Anne Boleyn, and the downfall of Thomas More.

And I won’t be repeating myself when I discuss the core ideas of this book, as it’s way different in scope and focus.

But before that, let’s just get all this out of the way: Bring Out The Bodies was a thoroughly enjoyable read; it’s a stylistic triumph again; again top-notch pacing; the story is stranger than fiction, even more so in this book; and again, this is better than palace fantasy. And yes, also for this sequel Mantel had to make choices: historians will keep on debating about Cromwell’s role, so she does not pretend to write a biography, but historical fiction indeed.

At the start of this book, Cromwell is about 50. The first chapter ends with the notion that Cromwell is a changed man because of Wolf Hall‘s events. “He is not the same man he was last year, and he doesn’t acknowledge that man’s feelings; he is starting afresh, always new thoughts, new feelings.” For much of the book one keeps wondering: what kind of man is this new Cromwell? And more importantly: is this truly a new Cromwell?

The answer is familiar to all of you who are past their school days – we change and yet we do not change. I usually feel like the same person as I was when I was 9, yet at the same time, I’m somebody completely different.

This second portrait of an older Thomas Cromwell pictures a man with deeper wounds. There is the emptiness left by his dead children and his dead wife – evoked both beautifully and harrowingly a few times. There’s also Cromwell’s enduring sympathy for his first patron, Cardinal Wolsey, who fell from grace & died. Mantel has chosen this mentorship as the thing that drives a lot of the decisions Cromwell makes surrounding Anne Boleyn’s downfall – this Cromwell turns out to be vindictive. Bring Up The Bodies shows a more ruthless man.

At the same time, Cromwell remains elusive – the scene where his adopted jester complains about how he has no defining features to imitate is particularly telling.

While Wolf Hall could be read as part Bildungsroman, part philosophical novel about the clash between the old and modernity, Bring Up The Bodies is very much a courtroom drama about alleged sex crimes, or better, a brutal investigation of a post-truth society obsessed with sex & power & canon law.

Bring Up The Bodies examines a society where the power of a formal accusation outweighs the actual truth, and where the law, “like armies, was an engine of state, not a mechanism for justice.” The state being Henry VIII, obviously. It’s all chilling to read, as heads are chopped off and bones picked clean.

What is the nature of the border between truth and lies? It is permeable and blurred because it is planted thick with rumour, confabulation, misunderstandings and twisted tales. Truth can break the gates down, truth can howl in the streets; unless truth is pleasing, personable and easy to like, she is condemned to stay whimpering at the back door.

While Anne Boleyn didn’t come across as a sympathetic character, when she and her supposed lovers are put on the scaffold, well, hats off to Mantel. Those pages are among the best I have ever read, and likely will ever read.

The show trials, their judicial aspects and the sophistry involved achieve a strange doubling effect. Both the accusers and the accused talk and act like actors on a stage, saying things they know not to be true, yet both we as contemporary witnesses and the public in the novel too aren’t always fully in the know. This results in something like a play within a play, fiction within fiction. But as these events did happen in reality, and the subject matter of Bring Up The Bodies is non-fictional, we experience some strange double hybrid between truth and lies while reading these passages: the lies told are truths at the same time: historic, historical, and judicial truths.

While times have changed, they haven’t changed completely. Double standards for men and women keep existing, and those with power and money end up on the right side of the law’s verdicts a whole lot more.

I feel some affinity for the Cromwell character – there’s something Zen to him, detached, refraining from judgement. Like me, convinced a free will does not exist.

He does not even hate Francis Weston, any more than you hate a biting midge; you just wonder why it was created.

He once thought it himself, that he might die of grief: for his wife, his daughters, his sisters, his father and master the cardinal. But the pulse, obdurate, keeps its rhythm. You think you cannot keep breathing, but your ribcage has other ideas, rising and falling, emitting sighs. You must thrive in spite of yourself; and so that you may do it, God takes out your heart of flesh, and gives you a heart of stone.

Mantel understands humans: we are bodies.

Cromwell himself explains it religiously in the next quote, but what he actually means is: I have forgiven myself, and I do not need God’s, as I did not make my own heart.

‘I have wondered, master, in what language do you confess? Or do you not confess?’ ‘God knows are hearts, madam. There is no need for an idle formula, or for an intermediary.’ No need for language either, he thinks: God is beyond translation.

There are so many great lines to quote, a lot more passages to discuss. But to do so would spoil your right to discover this rich, thick novel yourself. So let me try to end this review.

Mantel has managed yet again to mend our forefathers. She has done in words what not that many people do: say something significant about people on the wrong side of history – at the same time exposing that history, and the ways of present-day humans.

We think time cannot touch the dead, but it touches their monuments, leaving them snub-nosed and stub-fingered from the accidents and attrition of time. A tiny dismembered foot (as of a kneeling cherub) emerges from a swathe of drapery; the tip of a severed thumb lies on a carved cushion. ‘We must get our forefathers mended next year,’ the lords of the western counties say: but their shields and supporters, their achievements and bearings, are kept always paint-fresh, and in talk they embellish the deeds of their ancestors, who they were and what they held: the arms my forefather bore at Agincourt, the cup my forefather was given by John of Gaunt his own hand. If in the late wars of York and Lancaster, their fathers and grandfathers picked the wrong side, they keep quiet about it. A generation on, lapses must be forgiven, reputations remade; otherwise England cannot go forward, she will keep spiralling backwards into the dirty past.

The Mirror And The Light, about Cromwell’s last 4 years, before he is executed himself, is set for release somewhere this year, 2017. Cromwell’s third portrait promises to be even better. Towards the end of this book his feelings are so well sculpted, I can hardly imagine what it will be when he himself will face Death.

[He has] Gregory to dispose in marriage. It would be some compensation for the children lost, to have a grandchild. He imagines standing in a daze of light, holding up a small child so the dead can see it.

My advice: get yourself geared up, and dive into these first 2 books.

UPDATE 31/5/2017: In an interview with a Belgian newspaper, Mantel revealed the third book will focus on Cromwell’s youth, in which the city of Antwerp played a big role. The publishing date is pushed back to somewhere in 2018. It is unclear wether the last part of his life will still remain part of The Mirror And The Light too, but I’m guessing yes from the tone of the interview.