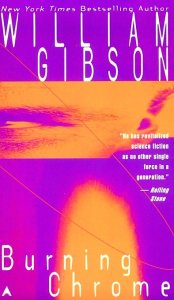 On the final page of the final story – the title story – Gibson envisions a possible future for prostitution.

The customers are torn between needing someone and wanting to be alone at the same time, which has probably always been the name of that particular game, even before we had the neuroelectronics to enable them to have it both ways.

It struck me how much reading books satisfies the same urge: wanting to be alone and needing someone at the same time.

Burning Chrome‘s 10 stories are populated by Gibson’s usual kind of characters, and deal with Gibson’s usual themes – although I probably shouldn’t make a sweeping statement like that, as I’ve only read two Gibson novels so far: Neuromancer & Virtual Light. Those two reading experiences weren’t fully successful, but reading this collection was, 100%.

The stories were published between 1977 and 1986, and are rather short: about 15 pages each, and not one of them above 30 pages. They fly by like a breeze, snappy, in prose that’s top notch. Here’s Gibson – in the voice of a photographer – on some building:

I shot one in San Jose an hour before the bulldozers arrived and drove right through the structural truth of plaster and lathing and cheap concrete.

That sentence alone should convince you.

Three of the stories are situated in the Sprawl universe: Johnny Mnemonic, New Rose Hotel and Burning Chrome. Three others have a co-author: The Belonging Kind was written with John Shirley, Dogfight was written with Michael Swanwick, and Red Star, Winter Orbit had Bruce Sterling helping out. Not that The Gernsback Continuum, Fragments of a Hologram Rose, Hinterlands and The Winter Market are less remarkable: the quality throughout is consistent – a rare thing in most short fiction collections.

Some of the stories are seeped in 80ies gloom: what else explains Gibson thinking shady people in the not so distant future would feel the need to implant Doberman teeth? Some obviously were written during the Cold War – future Germany still split up, the Soviet Union still a player. Some speak of pollution, the petroleum crisis and nuclear fear. But while noticeable, these things don’t get in the way of the stories themselves. I’d go as far and say these stories are timeless, and will remain so for a long, long time – paradox intended. Okay, there still are floppy drives, but who cares about that?

Aside from those Doberman teeth, there’s hardly anything extravagant in Gibson’s future projections – one of my main issues with 1993’s Virtual Light was how far off he was with his future projections there. It struck me how subdued Burning Chrome‘s stories are, with the exception of Johnny Mnemonic – and indeed my least favorite of the bunch.

It’s bordering on the incredible how Gibson is able to evoke a fully fleshed out future atmosphere in under 15 pages time and time again. And each time a different future: these stories are diverse! There’s an original take on first contact, there’s action on an orbital space station, there’s hacking & cyberspace, bar adventures, sleep deprivation, computer game sport. Not only fleshed out futures, but fleshed out characters too. These are stories about people, not cardboard.

It’s no coincidence the word ‘chrome’ is used in all but one of the stories. Gibson is a chroniqueur of smug appearance, exposing surfaces that are symbolic, shiny, deceitful. He is the very bulldozer of that second quote. Chrome is cheap, and underneath the veneer multinationals are predators too. William Gibson knows humanity, and its cultural history.

In a way, the same goes for Gibson’s characters. Underneath the exoskeletons and the neural interfaces, you’ll find the same old stuff: love, loneliness, ambition, angst.

For those interested, Graham of Who’s Dreaming Who is organizing a Gibson read-along in 2017, starting with Burning Chrome in January. Check out the details here:
https://biginjapangrayman.wordpress.com/2016/12/03/the-2017-william-gibson-read-along/

You can read the title story for free on Bean.

9 responses to “BURNING CHROME and other stories – William Gibson (1986)”