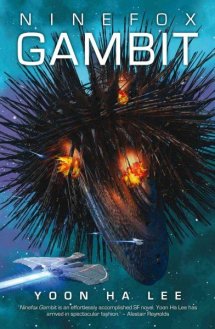 I was a bit afraid to start this book. I craved some new, cutting edge space opera, but it looked liked one of the basic plot premises seemed like magic. The calendrical system people use determines what kind of technology – weapons included – works in a particular region?? Could be unbelievable & probably is prone to plot holes. I don’t like fantasy that dresses up as SF (exhibit Dark Orbit), but I decided to give it a go.

Ninefox Gambit is the debut novel of Yoon Ha Lee – famous short story writer. It’s also the first book in a trilogy, The Machineries Of Empire. While the basic story in this volume concludes nicely in 317 fast paced pages, the big story is only just beginning. Nothing new there.

How about that fear?

Well, Ninefox Gambit isn’t hard SF. But it’s not magic either. The technology simply isn’t the focus, or at least not in the hard SF sense. Hannu Rajaniemie speaks of “poetry” in his praise, and that’s not far of the mark: a lot of the concepts and technology exist mainly as names – very few things are described – and those names indeed have a kind of surreal, poetic quality. It makes the first couple of chapters difficult: as a reader you have to keep guessing to interpret the shadowy world building. It’s not bad writing, on the contrary: it’s part of the novel’s charm. Yoon Ha Lee has found quite a distinct voice. On top of that, Lee drops us in the action, and nothing is explained.

Early on I had the hunch those “calendrics” are more or less a metaphorical name too. Lots of the technology is named with similes: giant warships are dubbed “cindermoths”. The calendrics seem software parameters of some sort. That doesn’t explain everything, but it goes a long way, and it sufficed to get a grip on the story.  Their calendar might be a religion to the novel’s populace, but that’s not unlike technology on Gene Wolfe’s Urth.

Fresh as Ninefox Gambit is, it’s not all new and shiny. Characterization is quite standard. Brilliant yet eccentric general, someone? Or a whole faction of ultra loyal soldiers? Nothing new, yet at the same time Lee uses these characters – and other standard SF stuff (hive minds, mind uploads, space warfare) – with an ease & confidence that’s hard to match. Yoon Ha Lee isn’t a try-hard – he just writes as if nothing special is going on. Great choice – lesser writers would have added 150 extra pages just to explain stuff, explain stuff, explain stuff. And not just explain, but show off too. Lee could’ve showed off easily: there’s lots of cool ideas here.

A big chunk of the book’s themes  – political organization, the human cost of empires, loyalty – aren’t new either. YHL doesn’t add anything to the discussion. That might change in the next volumes, but I doubt it. It doesn’t seem like this book was written as a political manifest, unlike books as The Fifth Season or The Book Of Phoenix. I do not think this is a problem – again, on the contrary, it’s a strength. Lee touches political themes, but doesn’t let those overshadow the narrative. This may be best illustrated by the gender dimension Ninefox Gambit has. Yoon Ha Lee is a trans man, and that fact infuses the book: the male protagonist occupies the body of the female protagonist. But it doesn’t turn into cheap & predictable identity politics. A reader that would not know about Lee’s gender status probably wouldn’t even notice it – not even in the one instance when this dimension is explicitly sexualized. Hats off to Yoon Ha Lee, and hats off to Solaris for not making it the marketing angle.

So – concluding thoughts? Easy. This is excellent SF for those that don’t like their setting spoon-fed. The plot or the politics aren’t groundbreaking, but Yoon Ha Lee has a distinct, confident voice. Fresh, yes. Poetic, yes. Space opera, yes. Those that need some more info before they’ll decide to take the plunge, there’s an excellent overview of the world and the onset of the story on Worlds Without End. Be sure to check that if I haven’t managed to convince you this might be for you.

The second book of The Machineries Of Empire, Raven Stratagem, is planned for release in june 2017. I’m preordering a copy.

UPDATE — As part of the Shadow Clarke Jury, Jonathan McCalmont wrote a critical, thought-provoking review on the politics of 9FG. It’s also here, on his site Ruthless Culture, with some discussion in the comments of myself, Terence Blake (Xeno Swarm) and others. Nina Allen and Megan AM (Couch To Moon) also wrote critical reviews as jurors.

They all raise interesting points, but what I believe they understate is the novel’s poetic qualities, a domain in which I feel this novel achieves something rarely (if ever) seen in space opera, and which opens up the ‘science/technology’ part of this novel to interpretation and dreamy speculation. The technobabble of old is replaced by something much more artful.

I argue on the matter a whole lot in my review of Raven Stratagem.

UPDATE 2018/6/13 — In a Reddit Ask Me Anything Yoon Ha Lee talked about the calendric system. It turns out his approach is an interesting metaphor about census reality. It dismisses my hard SF interpretation as the system being a software issue, and yet it doesn’t turn the book into just fantasy either, as ideology and culture are indeed known to influence perception and as such reality. Knowing this makes the book even better in retrospect.

Calendrical warfare was mostly inspired by Marcia Ascher’s Mathematics Elsewhere, which is a book about ethnomathematics. Fascinating topic–I lost my copy in the flood last year, but IIRC there’s a fantastic section on calendars and ways that different cultures handle timekeeping, and I thought that would make an interesting basis for a magic system if you coupled it with consensus reality.

The other thing that got me thinking about it was, sadly, 9/11. I was in grad school when it happened and I remember very vividly how this date that had (as far as I know) no previous particular association for Americans suddenly became very significant, how our society got reorganized around what happened. Someone from the hexarchate would understand 9/11 as a “calendrical” attack.

This isn’t a new concept. Peter Watson in War on the Mind, which is a layperson’s account of the uses of psychology in warfare, has a fascinating section talking about how the US military had originally compiled “propitious” and “non-propitious” dates in the Vietnamese calendar in the thoughts that they could coordinate attacks to take advantage of local “superstition.” (The discussion is on p.405.)

The consensus reality thing is not a new idea…some people have told me that it shows up in Terry Pratchett’s Discworld books, although it’s been over a decade since I read any of those so I can’t say for sure. Where the idea made an impression on me was in the computer roleplaying game Planescape: Torment, which was based on the Advanced Dungeons & Dragons Planescape setting. Planescape not only has factions, it has planes of existence where belief does in fact shape reality. There’s an instance in the game of a man being erased from reality because everyone stops believing in him–yikes! I took that in a more imperialistic direction (PS:T is more about self-discovery), because it naturally seemed that if the rules of magic/”physics” depended on the local consensus, then governments/people in power would have a very strong incentive to control what people thought, and psychological warfare and propaganda would be a huge deal.