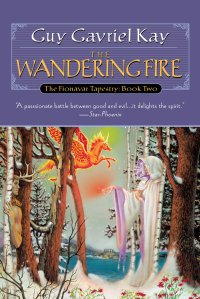 The Summer Tree, the first book of The Fionavar Tapestry, was gripping & amazing. It gutted me. As the series is regarded as one of the classics of fantasy, it is no surprise that The Wandering Fire was a feast as well. My review of The Summer Tree applies to this book too:  The Wandering Fire continues the story, and has the same strengths as Kay’s debut. I’ll elaborate a bit on some of those – language & emotion – , and discuss a few themes that are deepened in this second book. Naturally, I more than look forward to reading The Darkest Road, the concluding volume.

This book is written in not too long sentences that flow easily into one and another, yet often have an archaic, solemn character. Content and form are aligned: the prose fits the subject matter that is heavily infused with all kinds of myths & legends – even King Arthur makes his appearance in Fionavar. Guy Gavriel Kay is an expert of the simple but effective image. Expect no elaborate similes or lengthy descriptions, but beautiful, precise miniatures, like these:

The lofty words rose and then fell into silence, like waves breaking around the King’s rock-still face.

She closed her eyes. Moonlight made a marble statue of her, pale and austere.

The sword of the giant urgach crashed in an arc that seemed to bruise the very air.

In my review of the first book, I wrote that Kay manages to evoke emotions and psychological complexity without a lot of words. That’s true for this book too, and I think I now understand better how it works. Again, Kay doesn’t try to offer the reader complex descriptions or lengthy comparisons. What he does is simply name the emotion, often with the generic, common language word, like ‘tenderness’ or ‘love’ or ‘pain’. We as readers are then left to fill in the rest ourselves, and that is easy to do because there is no ballast (like a wrought simile) clouding stuff at all. This results in tapping our own emotional real life experiences a lot easier than in quite some other books, and makes for a much more emotional book, since, in fact, the emotions are our very own. The fact that Kay often describes nearly universal situations adds to this. Loss is loss – no matter if it’s in an elvish wood, or in whatever European city 2016 AD. Everybody has known a mother trying to be strong for her child, or a father being tender to a daughter, or somebody marked by experience.

She had her own courage, and she knew what had come. She tried to do all her weeping first before going out in the yard to tell her little one how beautiful his newest flower was, and that it was time to come in and eat.

It was hard to hear anything. Sharra saw her father turn slowly to her, a question in his eyes, and something else that it took her a moment to recognize as tenderness.

His voice was deeper than she remembered; there were echoes in it.

Animals have inner lives too, and Kay acknowledges this. They even make for great characters. So also the animals share in the emotions, and everybody that has had a dog or a horse can again project their own experiences in the story.

The dog was sitting in the snow, watching him with its liquid eyes. So much sadness there. He had an impulse to embrace it, but the dog wasn’t his, they had shared nothing, and he would not presume.

The title of this volume refers to nature: the wandering fire is the fire of wild magic, the fire of mystery, the mystery of Nature. As in some of the best mythic, Romantic fantasy Kay points to the fact that the universe doesn’t care, and has a certain amoral and random aspect to it. It is up to humans themselves to be heroic in this reality.

“It is in the truest nature of things, at the very heart of the Tapestry: the wild magic is meant to be free, whether or not it serves any purpose of ours.”

She knew she was sane, did not know why. One thing pulled her forward into some future tense. Not a good thing, nor could it have been, but it was real, and random, and hers.

Noam Chomsky has proposed a distinction between problems, which fall within our cognitive capacities, and mysteries, which do not. As I wrote in my review of a recent Chomsky book, fantasy is about such mysteries – and ultimately reconnects us with the mystery of Existence. (As opposed to science fiction, which is more about problems.)

He felt the ocean wash over his feet. It could be cold, he knew, but he didn’t feel it. He went a little farther out and then stopped, ankle deep only, to be present but not to presume.

He reached within for the pulse of Mörnir. And found it, desperately faint, thin as starlight beside the moon. Which is what, in a way, it was.   (Mörnir is an important god.)

More even than in The Summer Tree, sacrifice is this book’s most important theme. Also the well-known idea of growth because of suffering can be seen in this light. It is through sacrifice that we might be able to shape our destiny, and not be mere slaves to our genes and surroundings. I don’t think there is free will (the most convincing text on the subject I came across is here), but it’s a powerful and at times useful illusion, that doesn’t contradict the idea that we at least should strive – and in our sacrificial efforts doing so heroism arises. Old ideas like fate and predestination clearly show some cultures have always known that free will doesn’t exist. The central metaphor in The Fionavar Tapestry – the world and the lives of its creatures being a product of the Loom and the Weaver – reflects that as well.

“Never believe it!” Matt Sören cried. “We are not slaves to the Loom. (…) You are here, and whole, and each thing you have endured has made you stronger. It need not be now as it has been before!”

Characters strive and characters are heroes in this book. But they do so because they are who they are – the right person in the right place, destined, determined, shaped by necessity. Often, at crucial moments in the story, they just ‘know’ what to do. In other literature this might be considered annoying, but in The Fionavar Tapestry it is an essential part of the message. In a way this reflects real life too: the lone passerby jumps into the river to save a drowning child because it is needed, intuitively acts, and only at that moment becomes a hero – if he had passed by 10 minutes before nobody would have suspected him to be able to do so, not even he himself.

And on the words he felt himself dropping into the still, deep place, the pool within, which uttermost need had found.

Guy Gavriel Kay presents a broad, holistic world, wherein everything is connected, even other worlds. This is exemplified by his use of a smooth narration using multiple points of view, but contrary to some other epic fiction books, it is easy to follow. He again shows that one doesn’t need elaborate newness to paint the depth of human experience.