It was earliest morning, when even small trees cast long shadows and scarlet foxes trot denward through the dew like flecks of fire.

Indeed, novel. The 4 books in this series are actually one big book: the 333 pages of the first volume all of a sudden just stop, and Lake, the sequel, just picks up where Nightside stops. So, my definitive judgement on the Artistic Merit of this Book will have to wait until I’ve read the 3 other volumes – something I will most definitely do.

That doesn’t mean Nightside is a very good book. As with all Wolfe I’ve read, the same list of adjectives – bizarre, strange, baffling, different, mythical, mysterious and oddball – springs to mind. And harsh, and deadpan. Nightside is set in a giant generational space ship, of the spinning cylinder Rendezvous With Rama-type. It was sent from a far, far future Earth (or Urth, or the Whorl) to some distant planet. Yet Nightside doesn’t register as SF at first – as in The New Sun, the inhabitants of its world don’t understand their surroundings, aren’t even aware they are on a spaceship, and are not able to repair or even understand the technology – AI entities in the Mainframe that sometimes appear on screens are worshipped as gods. The ship has been flying for ages, and its origins are mostly lost to the book’s characters.

Nightside takes a long time to set things up, and actually, not that much happens. There’s nothing of the myriad overabundance of The Shadow Of The Torturer, the first volume of The New Sun. Patera Silk, an augural priest, learns that the buildings his order uses have been sold, and spends most of the book’s pages breaking into the villa of the buyer, trying to get the property back, not even 24 hours pass. Afterwards, he performs an exorcism in a whorehouse. That’s about it. I totally understand readers that would find it boring.

As expected, Wolfe’s prose is a though nut to crack at times. Sentences like the following are really good & really bad at the same time – how’s that for a paradox? Smooth reading this is not.

Now, as they trotted along a narrow track that to him at least was largely invisible, with the toes of his only decent shoes intermittently intimidated by the stony soil, Auk’s words returned to trouble him.

That slow, small story that needs slow reading doesn’t make this book the first thing to recommend to first time Wolfe readers. Still, there’s a lot to feast on. Wolfe blindsides the reader a lot: numerous times totally bizarre and unexpected things happen. And that in a book wherein not that much happens – how’s that for a paradox? There are also quite some brilliant, beautiful passages:

The faint golden lights of Blood’s house soon vanished behind the treetops and the breeze with them. Below the hill, the air lay hot and close again, stale, and overripe with a summer protracted beyond reason.

“I watched him kill a thousand once. Men, mostly. It was in the square. I watched from my balcony. They made them kneel facing him, and some still knelt when they were dead.”

So, maybe, even if you haven’t read Wolfe before, if you like your SF disguised as fantasy, and don’t mind a challenge, nor absurdities, maybe this book is for you. It even has slapstick! On could even argue that The New Sun is so out there that it could scare some people away from Wolfe forever, so maybe The Long Sun is a safer bet to start. It’s not that you have to read them in a set order. I do have to say The Shadow Of The Torturer gripped me a whole lot more than this other first volume, but it makes for almost impossible competition, so that’s hardly to be considered as critique.

Having said all that, let’s take a quick look at some of the themes Wolfe offers in Nightside The Long Sun.

It seems that this book might be about a struggle for independence, about trying to become free of our surroundings, most of which we don’t understand and even miscomprehend, and a struggle for justice too.

But we are on the night side of whatever it is that bars us from the gods almost constantly, throughout our whole lives. And we really shouldn’t be. I got that one small ray of sunshine, you see, and it shouldn’t be strange at all. It should be the most ordinary thing in the whorl.

It’s a struggle protagonist Patera Silk in this book doesn’t even realize he is a part of. There are some parallels with Severian, the protagonist in The New Sun, as also Silk seems destined to become a messianic figure. The fact that he has a limp too, just like Severian, is obviously no coincidence.

Another main theme in this book is moral utilitarianism – seemingly a necessary mindset in the above struggle. Throughout the book Silk increasingly choses one evil to avoid another, greater evil. Still, “as he surveyed it, he felt a surge of self-contempt.” Via Silk, Wolfe seems to promote a non-absolute form of morality. Maybe things will take a turn in the following volumes, since I’ve read people claiming Wolfe to be an avid conservative Christian. Does rationality have a place in a religious morality? Or, reframed, does understanding automatically leed to forgiveness? Maybe the next quote offers a hint about Wolfe’s own thoughts on it.

That he himself, Patera Silk, did not like such men probably meant only that he did not understand them as well as his own vocation required.

I’ll end this part of the review with one sentence about the nature of our senses that trumps all Gilman wrote in Dark Orbit, and that shows Wolfe’s seemingly effortless gravitas.

The white-headed one’s other carpal struck his temple, and the illusory nature of the world of the senses was made manifest: it narrowed to a miniature, artificially bright, which Silk endeavored to push away it winked out.

All and all, fans of Wolfe should read this for sure, and I’m eagerly going to read the remaining three volumes. When Nightside ended, things just seemed to begin.

And again: all of the above is subject to change after I’ve finished The entire Book Of The Long Sun.

UPDATE 8/2018 – While I still liked book 2 a lot, sadly, I’ve dropped out of book 3, just before the ending. The main reason for that was boredom. I write a bit more about it here. 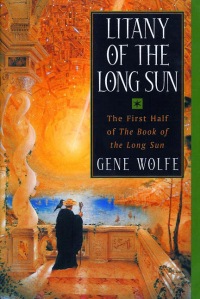