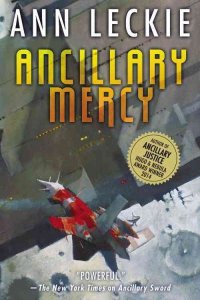 Ancillary Justice was a book about the non-existence of free will, and Ancillary Sword was about love. Ancillary Mercy adds the theme of identity, and what it means to be a Significant being. From the very first pages Leckie makes it clear that this is a book about Artificial Intelligence. Not only main character Breq, a former warship, but also the AI of Athoek Station – where the bulk of this novel takes place – and the AIs of several ships play an important role in the conclusion to the Imperial Radch trilogy. Them being beings with feelings turns out to be the real focus of these 3 books, not so much the gender issue, nor colonization. If there are lessons to be learned from Ancillary J-S-M, its main lesson would be to have respect for feelings. As such, this could be considered to be more a series on animal rights, than on males dominating our culture. The politics of Anaander Mianaai play an important role nonetheless, and Leckie dissects the ultimate ethical failure of its power systems meticulously. Somewhere between the lines is a strong case for the dismissal of the current form of capitalism, in favor of a more cooperative economy.

But feelings are upfront and in the clear, and not only the feelings of the AIs that populate the story. Leckie manages to explicitly give some character advice about arrogance and being self-centered & inconsiderate. The dynamic between Seivarden and Ekalu is recognizable to, I guess, lots and lots of couples. It’s great stuff, and very human. Seivarden grows as a person, and the pages devoted to their relationship could be copy-pasted directly in whatever non-genre literary masterwork.

“Do you understand why?” She gestured irrelevance. “No. No, honestly, Breq, I don’t.” “So why then,” I asked, only mildly surprised she hadn’t worked this out on her own, “don’t you extend the same courtesy to Ekalu?” “Well, but it wasn’t reasonable.” “I, on the other hand,” I pointed out, my tone even but edged, “am always entirely reasonable in your experience.” Seivarden laughed. “Well, but you’re…” She stopped. Froze. I saw the realization strike, the sudden spike of it. “This isn’t new,” I said. I didn’t think she heard me, though. Blood was rushing to her face, she wanted to flee, but of course there was nowhere she could go and be away from herself. “You always expected anyone beneath you to be careful of your emotional needs. You are even now hoping I will say something to make you feel better. You were quite angry with Ekalu when she herself failed to do that.” No reply. Just shallow, careful breathing, as though she were afraid a deep breath might hurt. “You really have gotten better, but you can still be an enormously self-involved jerk.” “I’ll be all right,” she said, as though it followed logically from what I just said. “I need to go to the gym.” “All right,” I said, and without another word she turned and left.

It took me a while to see these books are really, truly about characters, since, well, Leckie doesn’t make that easy for the reader. I’ve realized that the use of the she-pronoun had a profound effect on me, as not knowing wether someone was male or female obfuscated the characters. They were much blurrier to my mental eye than most characters in other books. The detachment I wrote about in the review of Sword partly stems from that. And only in this last book Breq becomes explicit about the feelings of AIs, so that they – aside from Breq – are unveiled as true characters too.

Both the sense of awe of the first book, and the strong emotions of the second book are missing in this third book. This isn’t a problem, since we get a thrilling story instead. Obviously, much of Mercy is about the confrontation we’ve been waiting for since the onset of the story. The final half of the book’s 328 pages is pretty high paced, especially compared to the previous installment. It’s quite a page turner. Add to that the newly arrived translator for the alien Presger, who turns out to be utterly strange and daunting, and yet hilarious. This combination of fear and comedy isn’t easy to do right, as it easily becomes or unbelievable or farcical. I laughed out loud several times, and the choices Leckie made to make that happen are maybe small, but daring and brave. The translator’s first scene made me think of Lost Highway, the movie by David Lynch, and that’s meant as high praise. The translator doesn’t only serve as a scary clown, but introduces some offbeat, interesting questions about identity too. It adds to the already rich, detailed, fine fabric of the trilogy.

There’s only one thing in this book I can’t really praise, and that the idealistic political stance of Breq. I don’t agree with his assessment that using Anaander Mianaai’s weapons or tactics for a short while, and only to deal with Mianaai himself, makes you ‘the same’. Especially since Breq is no 100% pacifist either. Pragmatism deserves better than to be dismissed offhand. Nevertheless, Leckie did write a powerful critique of contemporary Western imperialism, and the inherent failure of the tendency to invade and/or bomb the Middle East to fix things and bring peace, is pretty much just spelled out. It works and didn’t feel too preachy to me, because it’s simply true and Leckie avoids being sanctimonious.

Those who might have been skeptical of Ancillary due to the hype surrounding all those awards for Leckie’s debut aren’t idiots: a firm dose of skeptics about hypes is warranted, more often than not. I do wonder how big the role of the gender stuff that’s so clear on the surface of Justice was in all that hype. Now that these three – pretty diverse – books are all out, it is clear that their merit lies elsewhere. It’s also clear that Leckie is an important new voice in fiction, and I’ll eagerly read whatever she decides to write next.

(I hope it’s about the Rrrrrr.)