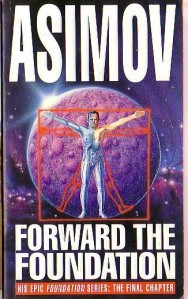 Somewhat better than the previous installment (Prelude to the Foundation), this book might be of interest to Foundation completionists, but it lacks the scope, depth and vision of the Trilogy, and it also lacks the interesting story the 4th and the 5th novels still had.

This is just Hari Seldon working on psychohistory on Trantor, setting up the Foundations. At least it isn’t as predictable structure-wise as Prelude…. There’s not really that much of interest to learn, and as always, Asimov is not a good stylist, nor a writer of vivid dialogue.

The text on the back cover is hyperbole: this is no “crowning achievement” nor a “stunning testament”. I feel Asimov had better not succumbed to his readers’ pressure, and should have ended the series after Foundation and Earth. The 2 prequels feel forced, but this is the finer of the 2, for what that’s worth.

Still, since it’s only about 400 pages in pocket format, and not a dense read at all, completing the series isn’t a big investment of your time. Just don’t start reading because of Foundation-FOMO.

originally written on the 10th of October, 2014